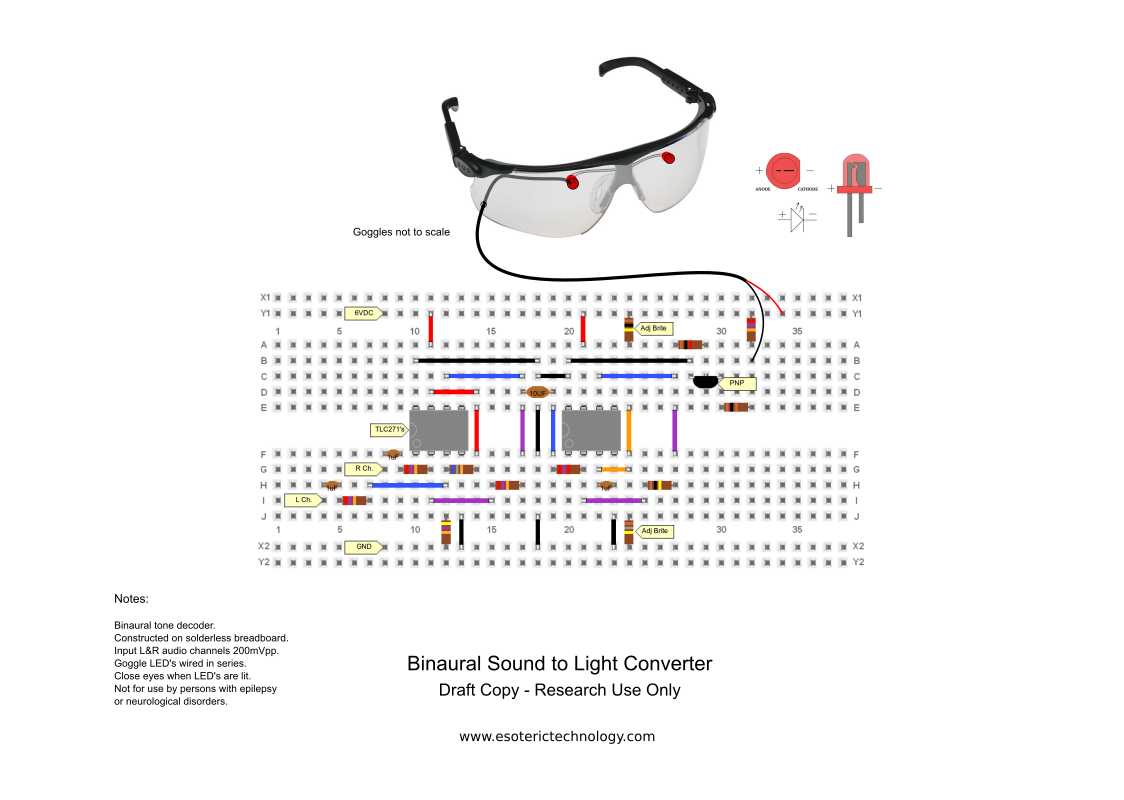 Light and sound “mind machines” rose to popularity during the mid-1960’s with the emergence of the human potential movement. Still widely sold today, these compact devices employ headphones and LED-fitted goggles to apply synchronously pulsed, sensory stimuli to the wearer. The underlying principle is not unlike the evocative combination of a flickering campfire and tribal drum beats. 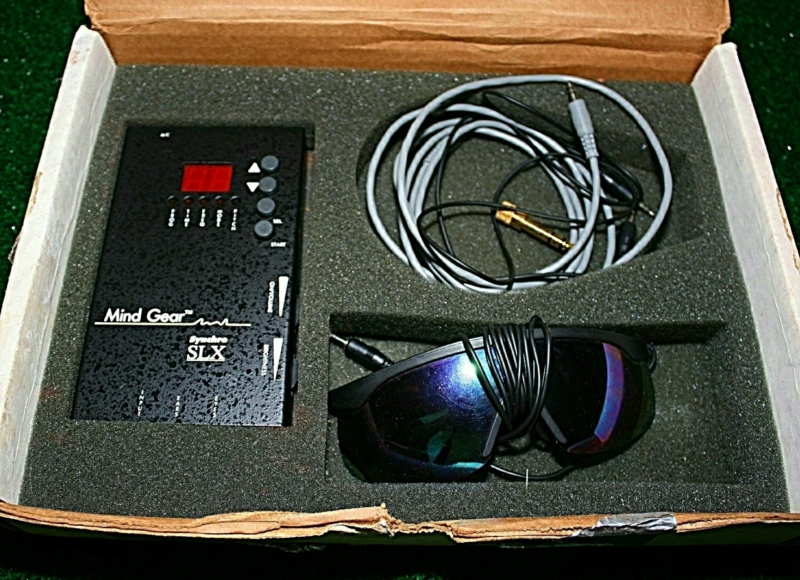 Most commercial units feature a built-in microprocessor. This is manually programmed by the end user to output the dominant EEG frequency associated with the particular mental state desired. When translated to audiovisual stimuli, this mode of activity is adopted by the brain through an involuntary process termed “neuro-entrainment”. Any of a wide spectrum of human subjective attributes and capabilities may thus be summoned in minutes with the push of a few buttons. 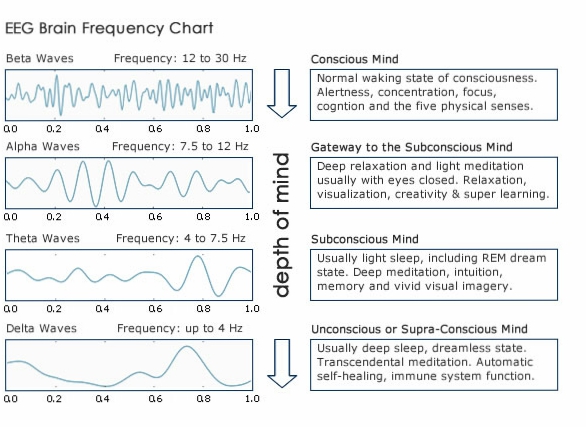 There are two routinely made refinements to this basic technique. The first is to apply an automated, gradual progression of frequencies over the course of a typical 15 minute to one hour session. The purpose is to simulate a natural transition toward the target experience so as to overcome any internal resistance to change. It also minimises the fatigue factor inherent to repetitive, or deterministic, signals. As this “ramp” progresses toward its conclusion, changes in feeling or perception may occur according to the frequencies active at any given moment. 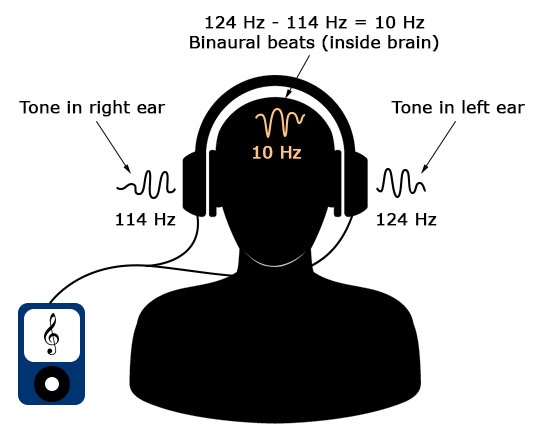 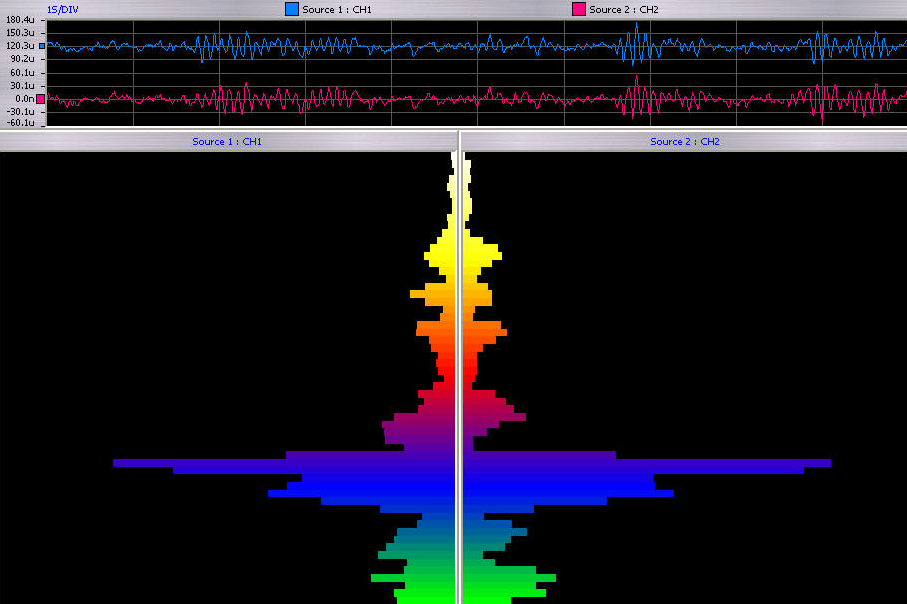 The second is to play a different audio sine wave frequency into each ear. The intriguing “binaural effect” is thus invoked, during which the brain senses not only the original frequencies, but also a muted hypnotic beat at the difference between the two. Since the beat is already a byproduct of neuronal activity, this technique establishes a low resistance pathway for uptake of deterministic ELF programming. It also promotes functional coherence between left and right brain hemispheres, reportedly a contributing factor to “higher” faculties and modes of cognition. The illustrations above show an example of this method and a typical instance of bilaterally balanced EEG amplitudes.

The core principles described above can be implemented without the purchase of a specially manufactured device by enlisting the aid of two free, cross platform software applications.

First, a binaural signal is generated within the audio editing program Audacity, as demonstrated by the two practical examples below.

Signal 1: The nominated difference frequency is to be arrived at after 10 minutes, during which time the originating frequencies descend by 100% to their final values. The latter are calculated to be one half, symmetrical +/- deviations from 8Hz around a 40Hz base. This combination of ELF’s is reported to enhance intuitive abilities or ESP.

Listen to signal 1 carefully to detect the warbling beat which transitions from 16Hz to 8Hz, and then remains steady for the final 2 minutes. Lift one headphone off your ear and it disappears. Audible clarity of this effect will depend in part upon the quality of your sound card.

Signal 2: As a contrast in purpose, the following track is intended to arouse feelings of extroverted engagement and elation. It is based upon 31.32Hz and 2000Hz. Since these are solitary biophysical resonances, the pitch shift step has been omitted so as to avoid random effects.

The reason why the beat of signal 2 sounds less pronounced in this case is because its tone is higher, and also a lesser proportion of the originating audible frequencies. This could be largely overcome by substituting more stable oscillators in the form of dedicated hardware.

Let There Be Light 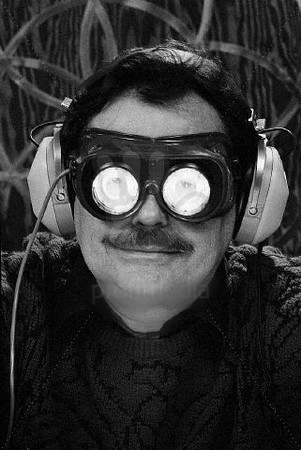 When multiple sensory channels are addressed with coherent stimuli, the resulting impact is not simply additive but rather exponential. A handy way to access the complementary benefit of synchronous light pulsation is to play back the chosen audio track through software that can generate and display sound-to-light patterns. Well suited to this purpose is Clementine.

Open a saved MP3 file. While it plays, select Tools > Visualisations. The visualisation screen will appear. At its bottom there is a roll-over menu. Click on the wrench icon > Select “visualisation”. Then click your way down the many patterns to find one that best emphasises the track’s beat frequency and its associated mood. For optimal effect, it is preferred to view in full screen mode, and in a darkened room.

For fascinating experiments in telepathy or other cooperative ventures, plug a 3.5mm stereo signal divider into the output socket of your sound source. Two sets of headphones can then be connected at once, thereby enabling two persons to synchronise neural activity under the influence of identical sensory stimulation.

Some readers may prefer the more traditional and immersive facility of close-fitting goggles. The battery powered electronic circuit at the beginning of this article is shown constructed on an easy-to-use, solderless prototyping board. It will extract the difference frequency from any two audio tones of a binaural signal and power two LED’s wired in series. Click the image to view full size and then zoom in about 300-40% to accurately read the resistor colour bands. Purple is particularly hard to see against the brown. A chart of corresponding numeric values is provided on the Sample Projects page. The volume of the stereo amplifier should be set, in advance of connection to the board, to about 200mVpp as measured on an oscilloscope.

Both eyes should be kept closed while LED’s are illuminated or flashing. Red is the best colour for skin penetration. If necessary, vary the two brightness resistors to a comfortable level. Entrancing kaleidoscopic patterns will be projected upon the mind’s visual screen that vary in geometric form and complexity with the frequency of pulsation. Be advised that photic stimulation is contraindicated for persons with epilepsy or other neurological disorders. For further information, consult your licensed physician.