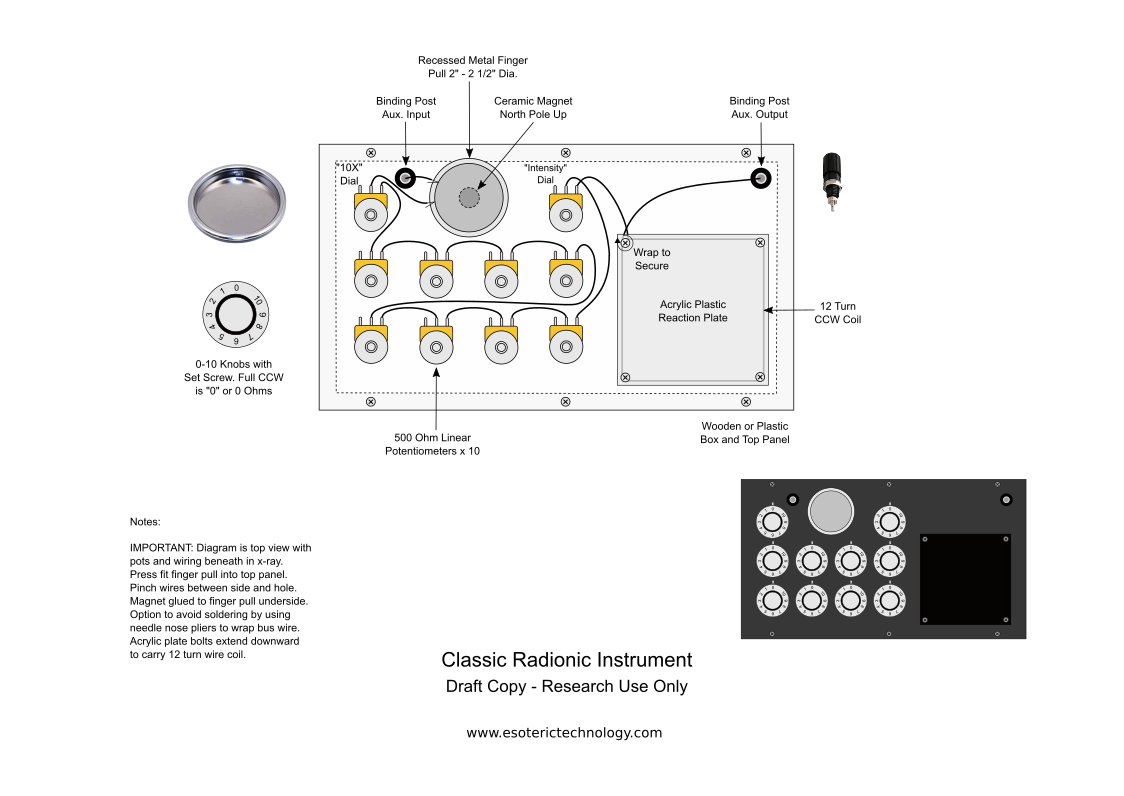 In the context of this article, “classic” refers to the original black box style instruments pioneered during the early 1900’s by Dr. Ruth Drown, George de la Warr, Bruce Copen and pthers. Although originally simple resistance tuners, various elaborations have been promoted over the years. These include printed tuning cards, multiple tuning banks, electronic amplification and biofeedback inspired operator interfaces. One recurring theme is improved resolution of the subjective dowsing response pivotal to the analysis or “diagnostic” mode. However, when closely examined, many are commercial strategies to value add or bolster customer confidence. Because all rely upon the same practiced intuitive ability, real life outcomes are equally achievable with a legacy device.

Being a niche product, radionic instruments are traditionally priced far in excess of the value of included components. This disparity may be obscured by “must have” features, semi-scientific jargon and a culitvated mystique. Self-builders may therefore be stymied by a lack of consensus and technical detail. The diagram above is intended to address this situation. It objectifies the metaphysical premise with a technological overlay that is the hallmark of this modality. This represents a conscious superposition of thought and tactile construct that galvanises the will of the operator into a force of controlled manifestation. 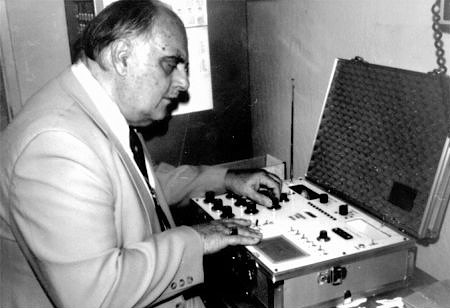 Radionics is a mechanised symbiosis between dowsing and projected intent. To begin, a symbolic representation of the intended recipient is placed within the receptacle. This establishes a back channel for non-local access. Programmed telekinetic influence can then be applied using either of the two generic methods described below.

The first, being more traditional, identifies the most direct path of action by performing a detailed analysis of the subject at hand. It relies upon published “rates” that list numerical correspondences for a wide range of physical objects as well as modes of expression. In the classic system, the latter are often denoted by the first numeral being a multiple of ten. One by one, rates deemed most pivotal to any given purpose are dialed in on the tuning bank. Presence within the subject is indicated by an affirmative dowsing response. A quantitative readout of between 0-10, can then be similarly determined by slowly rotating the “intensity” knob. Leave any knob not in use on “0”.

Once the most relevant rates have been thus determined, they are individually broadcast, generally several times per day. During this phase of operation, a strengthening result is achieved through dialing the rate in as-is. By contrast, to dissipate an unwanted state each digit is first subtracted from 10 to produce an inverted string. For example, 20.7386 becomes 80.3724. Historical “rate books” for this system can be downloaded free of charge from the Curio Books page. 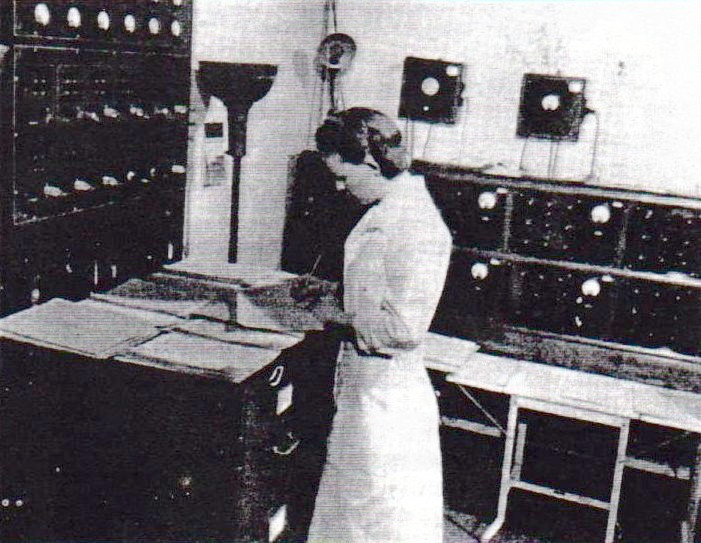 The second method does not require existing rates. They are determined on-the-fly, but as a result do not constitute specific insight as to the underlying condition. Holding one’s preferred outcome in mind, each knob is rotated in sequence until a “yes” response is experienced. If none occurs, leave that knob at “0”. The instrument is now automatically in broadcast mode to predispose the desired tangible result.

In all cases, the intensity knob can be enlisted to monitor the momentum for change, even before overt signs appear. Further information can be found on the Magneto Radionics page, including an alternative 0-100 tuning system and how to utilise the “stick” plate as an alternative mode of dowsing response.

For simplicity, the diagram at the beginning of this article shows the control panel from top down. In other words, the potentiometers (“pots”) and series connected wiring beneath are in x-ray view. To avoid having to mark the panel, use standard 0-10 270 degree, top-hat knobs. Alternatively, enlarge and print out the prepared artwork from the Dowsing Tools page. Because manufactured low profile enclosures are rare, one is best custom made from wood with top and bottom of plastic sheet or composite board. The input and output posts are optional, serving only to externalise the respective functions of the receptacle and plate. 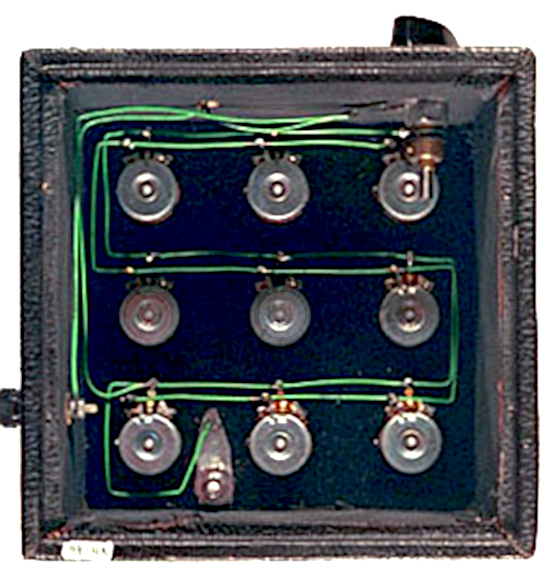 In considering “improvements” advocated by other builders, be aware that some may represent self-imposed strictures, or artifacts of subjective bonding with their machine. However, one basic improvement worth implementing is to route the entirety of wiring through an on/off switch and battery powered LED. For this modification, it is preferred to link the pots in parallel to prevent excessive voltage drop that would cause the LED not to glow. The famous psychic Edgar Cayce once stated electricity is the closest thing on Earth to God. According to our interpretation, the enacted current flow potentises the circuit by initiating a counter flow in the ether. Added to this, according to a quantum theory termed “Berry’s Phase”, electrons can retain a memory of their progressed motion as spin potentials. This momentum, as encoded by the semicircular tuners, is then unpacked as a supplemental force at the instrument’s emitter. 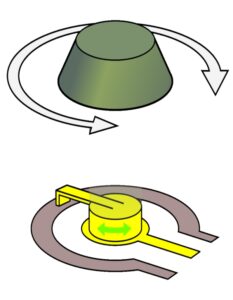 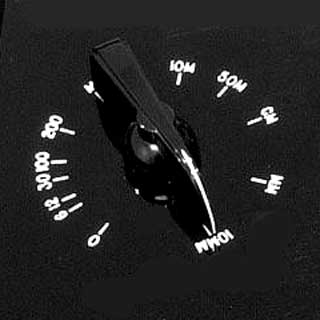 As described by Walter Russell, matter is composed of two forces in a state of reciprocity, one generative and one radiative. Conduction of the latter by wire, or telekinetic link, is the basis for radionic transfer of the active component of any given substance. Once it achieves preponderance, the opposing polarity is invoked as a creative impetus. As a specific example, this can be applied experimentally to preparation of simulated homeopathics. Insert an originating substance in the receptacle. Adjust the intensity knob according to the potency indications above. Place a bottle of distilled water, containing a few drops of gin, on the stick plate. Alternatively, connect an immersion electrode to the output post. Remove after a few minutes. Discard originating substance. For non-medical training purposes only.