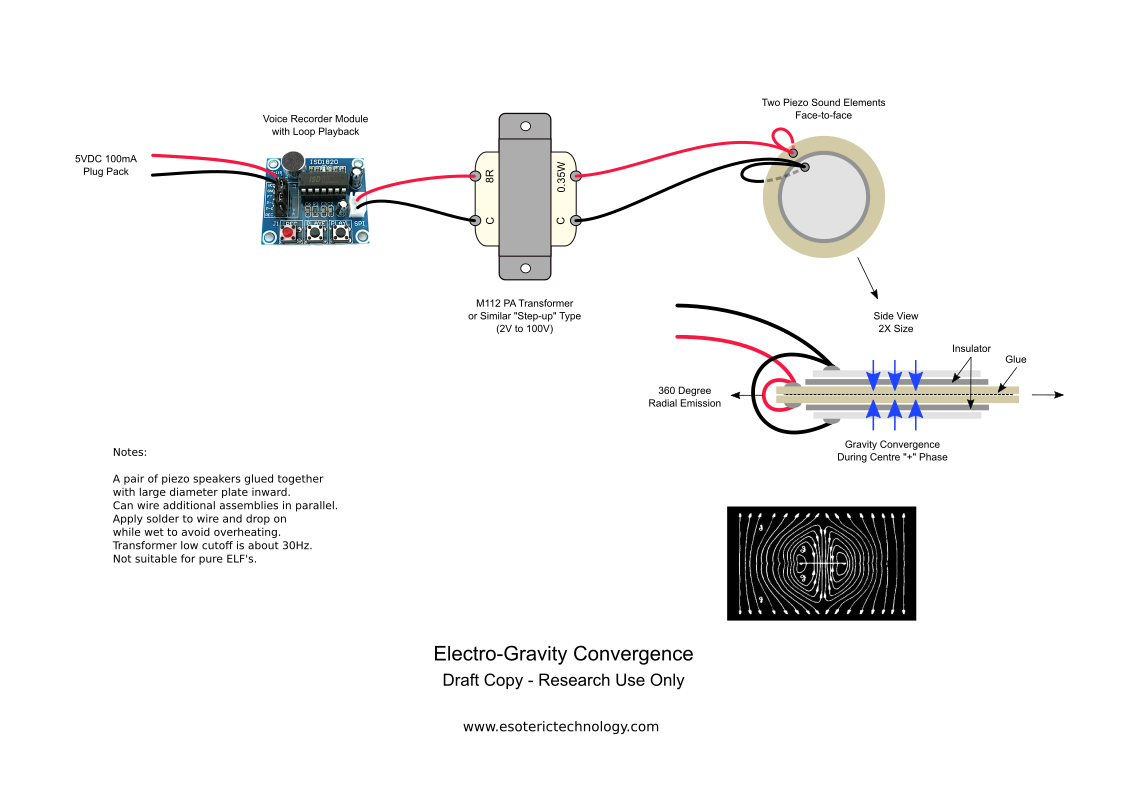 This project demonstrates an innovative modality utilising electrical polarisation of the local gravity field. According to modern physics, all matter in the universe is comprised of a limited set of fundamental particles. Some researchers speculate that these, although differing in behaviour, derive from a background field of dimensionless points, otherwise known as the ether. According to one theory, displacement of same is equated to gravitational flux. Electricity arises when a 2D linear motion is imparted. Magnetism is a 3D phenomena that emerges by adding rotation. Within the field of electronics, the corresponding interfaces for these two domains are the capacitor and coil. 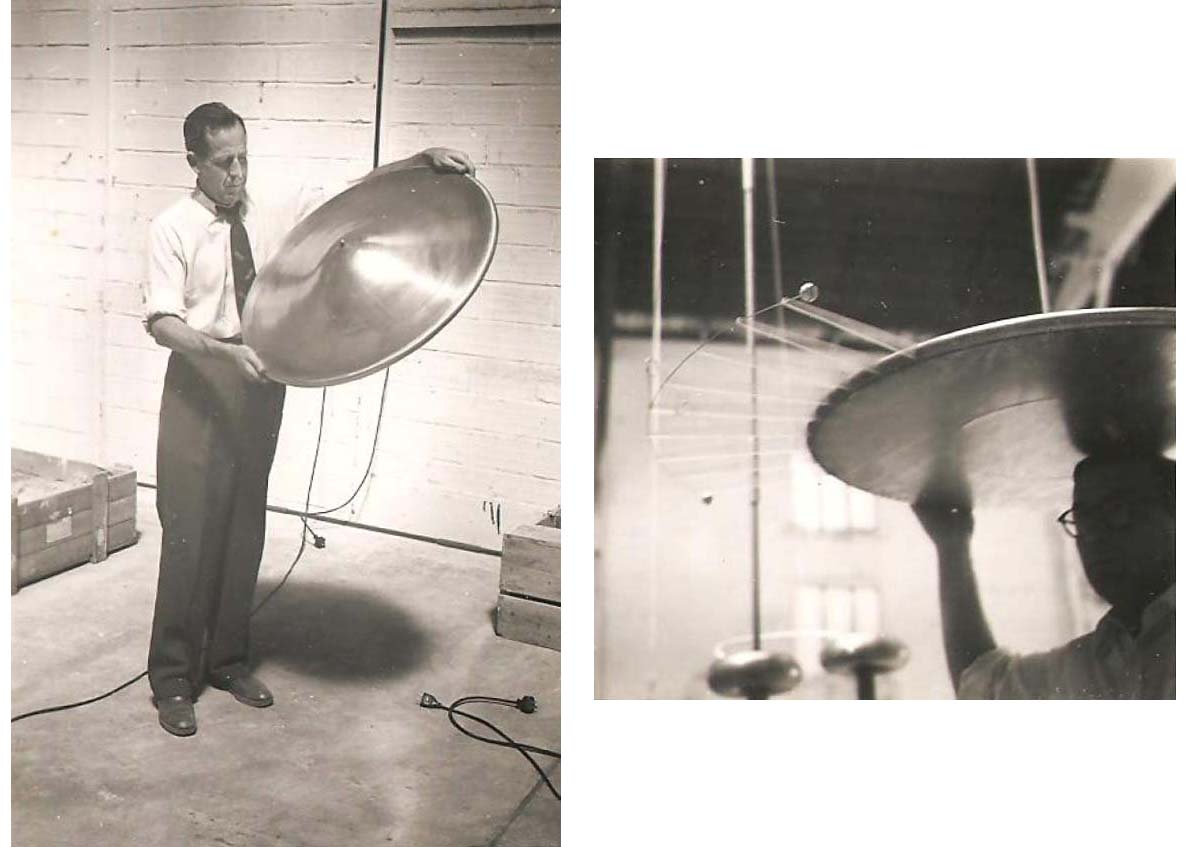 In its most basic form, a capacitor is comprised of two flat metal plates with a insulating layer sandwiched tightly between. As discovered by Thomas Townsend Brown (above) in the 1950’s, when a voltage potential is applied across them, a small amount of lift occurs in the direction of the positively charged plate. The effect is proportional to surface area, voltage magnitude and permittivity (dielectric constant) of the chosen insulating material. The latter property reflects the degree to which constituent molecules elongate and align under electrical tension. An accompanying recoil in the ether acts as a concentrating lens for the ambient gravitational field.

Being the “weakest” of the four fundamental forces, gravity represents a less broadly compelling entrainment influence. Its main advantage is a focus of sensed impact within the head region, whereas EM tends to be more whole-body. This is not surprising given that RNA within brain tissue possesses one of the highest dielectric constants in nature. An evolved biobehavioural coupling mechanism is thus implied. For example, some people can predict the approach of a rain storm by feeling the mild bearing-down that accompanies reversal of the Earth’s surface charge. Another example of extra-sensory reception is periodicity of sleep and waking as triggered by a diurnal shift in atmospheric plasma density.

The diagram at the beginning of this article subscribes to economy of parts and voltage. With appropriate skill and safety measures, the basic concept can be scaled up. Although any audio signal source could be enlisted, the opportunity will be taken to introduce ready-made, sound recorder modules. These offer the prospect of low cost and stand-alone operation. One limitation is the 10 or 20 second playback time of their ISD1820 integrated circuit (IC). For continuous operation, ensure a selectable “loop” feature is built into the circuit board. Best fidelity is obtained by recording directly from a headphone socket or similar. To do so, replace the fitted microphone with a 1K resistor, and add a 10K resistor in series with the input.

The IC incorporates a small power amplifier, capable of driving the 8 ohm primary of most audio transformers. Employed here is a step-up type designed for loss compensation in public address (PA) systems. It boosts standard line level voltage of about 2Vpp to 100V. The lowest labelled wattage and “common” of the secondary are connected across the capacitor plates as illustrated above. If a portable device is preferred, substitute a “mini” line matching transformer (below right), and operate from three AA cells instead of the 5V plug pack. 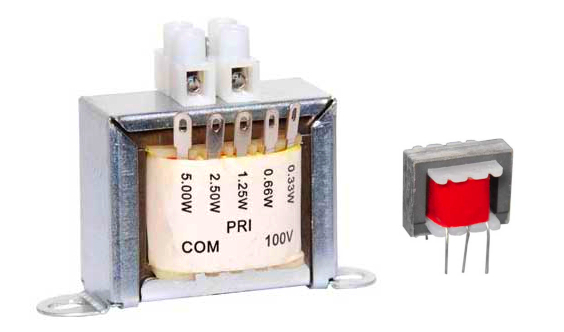 Because the transformer secondary is not ground referenced, within each cycle its output swings between positive and negative voltage. When applied to the plates, this establishes a charge-discharge action that mirrors the changing amplitude of each cycle of the input signal. By contrast, a non-reciprocating output would cause charge to build to maximum and then remain static with no transmitted effect.

The emitter in this project is fabricated from two bare piezo speaker elements. These are commonly available in diameters of up to 35mm. In essence, each is a capacitor but containing a very high Q ceramic insulator, such as Barium Titanate (BaTiO3). This type of material is highly susceptible to polarisation, and will burst if excessive direct voltage is applied. To begin construction, glue the pre-wired speakers tightly together, larger plates face-to-face. If there are no factory fitted leads, apply a dab of solder to the wire and drop quickly into place while still wet to avoid heat damage.

This novel geometry forces the gravitational inertia generated by each speaker into diametric opposition. A secondary tension is thus produced which escapes outward at 90 degrees in a radial plane. Output can be multiplied by wiring a number of such emitters in series to form an array. As previously explained, this convergence occurs only once per cycle, when the centre plate goes positive. On the negative swing, the effect is gravity rarefaction.

A “cap-coil” variant involves substituting the joined centre plate with a bifilar pancake coil, similar to that on the Hyper-Realism Audio page. Clamp this between two large diameter metal disks, e.g. anodised aluminum sheet. A layer of mylar film is interleaved on either side of the coil in place of the speakers’ BaTiO3. Because the former exhibits a far lower dielectric constant, anything envisioned as “polarisation” supposes more applied voltage. The simplest way to accomplish this is with a different type of low current transformer having a higher turns ratio. In all instances, ensure safe levels of voltage and current are determined and not exceeded.

Although less efficient by conventional standards, the cap-coil offers unique benefits for esoteric work. Electrical pressure, during the convergent half cycle, maximises sum-zero cancellation of EM vectors into virtual potentials or “scalar” waves. The applied signal is thus translated into counter-space, a higher order domain more closely associated with mental and emotional states. At the same time, opposing currents within the bifilar coil itself peak during each phase reversal, in effect doubling the introduced frequency content. Accordingly, persons within range will experience the enriched energy profile of two octaves embedded within mutually augmentative modes of transmission.

Neither the recorder module nor PA transformer are manufactured to pass the sub-30Hz, brain wave band. In the context of our exploration of psychosomatics, there are two methods to overcome this limitation. The first is to amplitude and/or frequency modulate an ELF upon an audio frequency carrier that possess affinitive properties. The second, featured here for instructive purposes, employs audio signals only, but ones that still evoke a categorically subjective response. 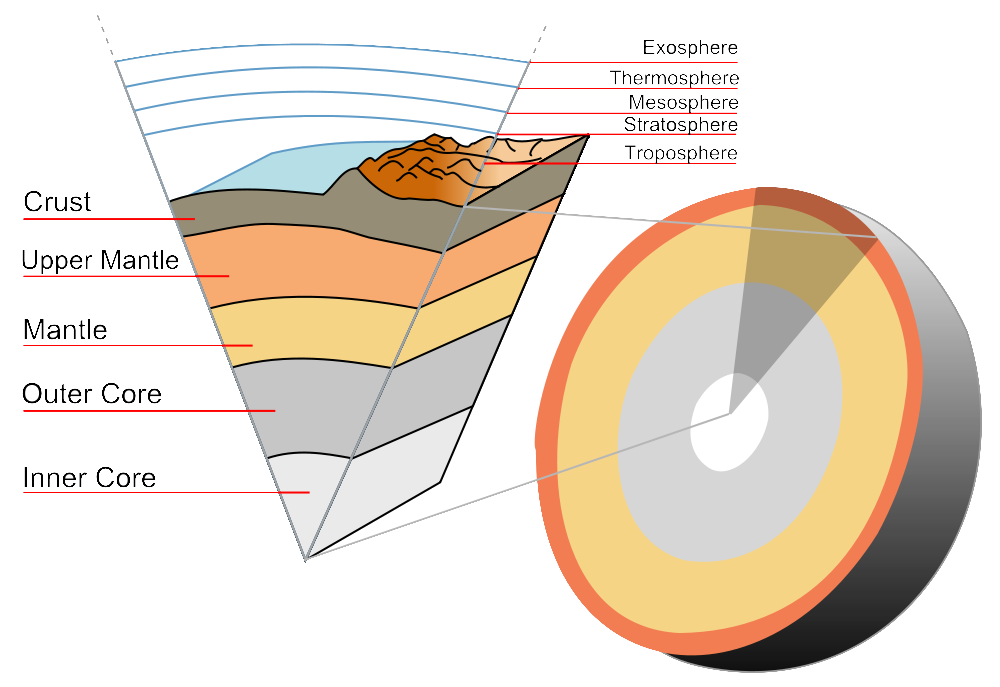 Under this heading are included broadly tonifying nature sounds such as running water, ocean surf and bird songs. However, since this project deals with gravity, there is a source more intimately linked with this realm of activity. This is the Earth’s five geological layers, each defined by a different type of rock. Visualising the circumference of each as a resonant waveguide, the approximate distance to frequency conversions are as follows.

According to the software procedure on the MP3 ELF Entrainment page, these may be individually generated and then mixed into a monophonic track. The result is an interpolated energetic signature of our host planet. In this regard, it satisfies the sought-after criterion for an implicitly beneficial influence within the audio spectrum. Many more can be found by searching literature relating to biophysics, universal laws and sacred science.

Alternatively, interference modulation can be enacted by energising the coil and plates with different but functionally integrated signals. One such approach is to imprint intelligible content from the plates upon a receptive “alpha” brain wave frequency. Feeding the latter ELF into the coil from a second amplifier circumvents the step-up transformer’s band pass issues. In this instance, the active electrical tension is exerted almost entirely by the plates. A practical application would be to propagate subliminal affirmations to over-ride mass mind control broadcasts by Governments or corporations.