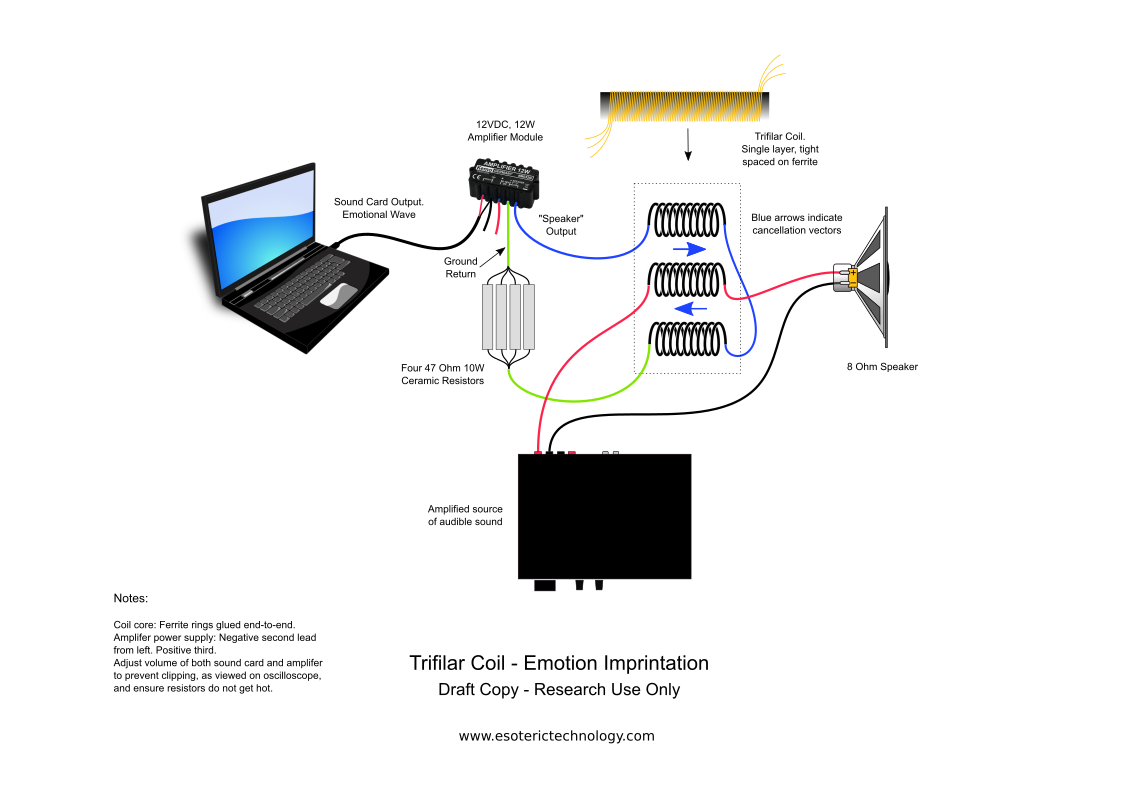 This project combines, for demonstration purposes, two unconventional techniques relating to subliminally evoked response. These are the trifilar coil and energetic profiles or analogues of basic human emotions. If an electronic signal is viewed upon an oscilloscope, its progression over time can be seen as a cyclic rise and fall of amplitude relative to a horizontal baseline. Its inductive effects upon living systems is governed by the rate and contour of this action. These two parameters correspond respectively to frequency and wave shape. Of primary relevance to this article is the latter.

The translated force of wave shape is sensed on a somatic or “gut” level. This autonomic response can be appropriated to induce basic moods or emotional states. To ensure a generic outcome, the nominated influence must be reduced to its simplest form as illustrated above. Reliance is thereby placed upon endogenous form resonances that underpin humanity’s near-uniform appreciation of music, art and architecture. The precognitive feeling of any wave progression may be evoked by imagining you are riding over it as if in a car across undulating terrain. This same dynamic can be imparted in real time as an electronic stimulus of similarly varying amplitude. Being thus obscure to the ordinary senses, and devoid of informational content, any subsequent response is involuntary and transparent to cultural interpretations.

The standard laboratory instrument for user-programmed wave shaping is an arbitrary wave generator. Purchase price starts at around $300. A more readily accessible option is audio editing software such as the free Audacity that provides a graphical interface for this same function. 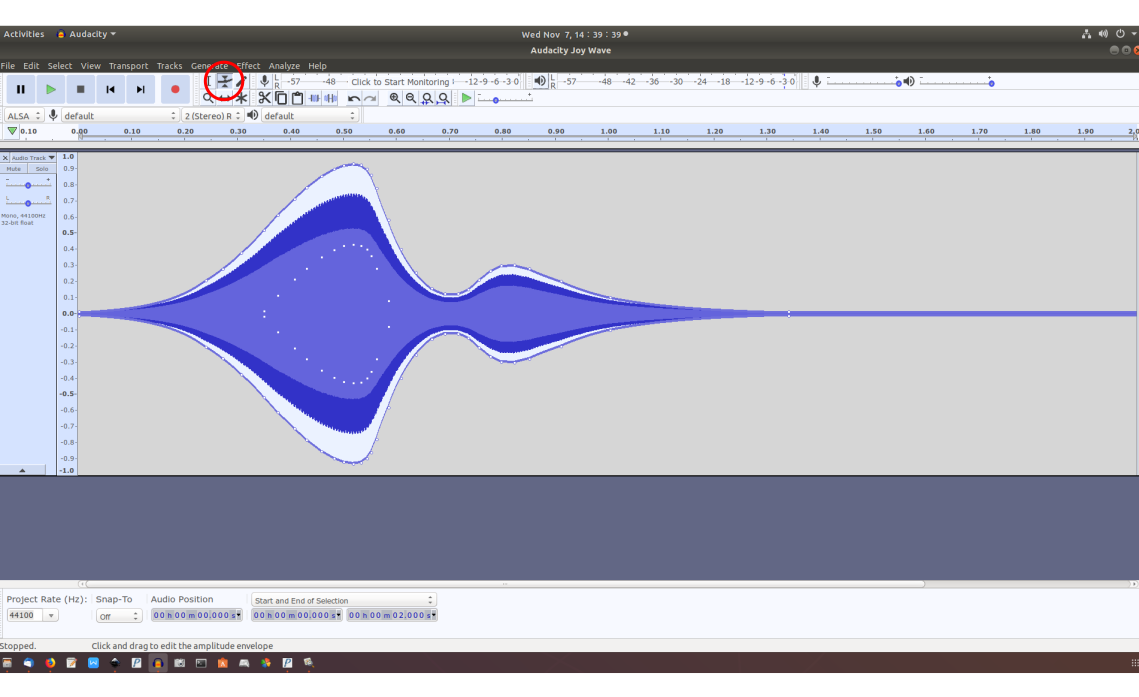 The above screenshot of displays the wave shape attributed to “joy”. Audacity depicts it in bilateral symmetry to match a sound card’s normally bipolar output current. Due to the naturally slow time frame of somatic response, the preferred repetition rate is about once every two seconds, or 0.5Hz. Given the limitations inherent to this approach, such an “envelope” can only be superimposed upon a previously generated audio tone. Criteria for choosing the latter as an augmentative influence are explained on the MP3 ELF Entrainment page. In the example below is selected 8000Hz (8KHz), being the first lower harmonic of the acoustic resonance of the inner ear. Begin from Audacity’s top menu bar as follows

To now modify the wave shape, drag the lower edge of the track window downward to enlarge the work space. Select the envelope icon situated between the “I” and pencil. Left click your mouse repeatedly along upper and lower margins of this portion of the track to place handles in positions that align vertically with the anticipated peaks and valleys of the final wave. Each is then dragged up, down or sideways to define the voltage amplitude at that point. To make this easier, enlarge one of the above wave plots to the approximate size of the active window, print out on thin paper and tape it over the monitor’s screen. Conclude by adding extra handles at the key transitions, and drag to smooth out the contour of the wave. In the present example, enveloping is only applied to the leading 61.8 percent of the linear time frame. This provides a Phi ratioed stimulation recovery period.

The resulting single cycle arbitrary wave is made continuous by playing it back in loop mode from the within software. Alternatively, an MP3  recording can be made of same for use with a stand-alone device. Here is a saved two second sound file of the above completed signal.

The trifilar coil is a structural elaboration upon the non-inductive bifilar coil. During fabrication, a third wire is interleaved flat between the usual two. Chirality, left or right handed, is a contributing factor in terms of response. When an identical signal is fed separately into each winding of the bifilar portion, but in opposite directions, their electromagnetic fields repel and tend to cancel. Any dynamic they originally expressed is thereby imprinted as a torsional substructure upon the non-cancelled signal within the intervening conductor. If the latter happens to be music, sound effects or voice, this serves to both mask the hidden content and conform with conventional modes of electronic storage and replay.

Any such composite signal may also be routed through additional trifilar coils. Each successive cancellation will nest an additional “layer” of enfoldment aligned with the next most superior freedom of rotation. Although unrelated to the present discussion, this has applications for covert reality engineering. For example, an aggregation of wavelengths that defines proportion can be projected upon supra-physical domains as morphogenic templates to predispose condensation of equivalent material form. Another refinement is “quantum information sharing”. This is performed by adding a common ingredient, such as white noise, to both the cancelling and non-cancelling signals, thereby further integrating activity between both domains.

To enhance consolidation of force vectors between the coils, the winding former should be a material possessing the characteristic of non-linear response. A convenient option is 25mm OD x 15mm ID x 10mm thick (or similar size) ferrite rings, widely sold for EMF suppression. Although short, any length can be derived by joining together end-to-end with glue or a layer of masking tape. Twenty rings stacked to 200mm is a manageable number. If desired, an active core such as a small neon or fluorescent tube can be substituted, with the added benefit that the chosen plasma ionisation frequency can contribute synergistically to the overall effect. 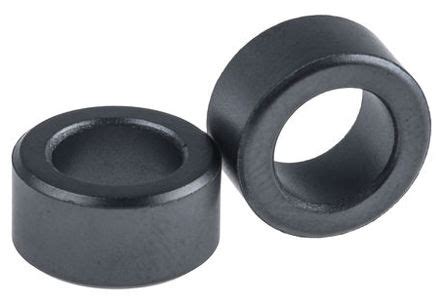 The coil is wound by first fastening, with tape, enamel coated wires from three separate spools to one end of the former. The latter is then rotated in one hand, while nudging the wires into place side-by-side with the thumb of the other as it feeds evenly off the spools. To maximise coupling, there should be no gap between adjacent turns. Continue until the entire former is covered, and tape the finished end to secure. If desired, the completed coil can be varnished or enclosed within heat shrink tubing for protection. To ensure a solid solder connection to the amplifier leads, about 10mm of clear enamel coating must first be removed from the ends of the wire with fine sandpaper. If you loose track of the terminations, check continuity with an ohmmeter.

As previously described, the trifilar coil incorporates three windings fed by two signals. One is the music, sound effect or spoken voice to be consciously heard by persons within range of the speaker. A typical powering device would be a conventional hi-fi amplifier connected to a CD deck, MP3 player or line output from a computer sound card. If stereo, only one channel is required.

The second signal is the one to be cancelled, being the unheard or subliminal influence. This can originate from similar storage media, but is directed through a separate amplifier. For reasons of safety and reliable construction, this should not be an automotive or mains powered type. Instead choose a low wattage kit or ready made module that operates from a mains-isolated, 12VDC source. The Kemo 12 watt amp pictured below is one example. An online search will reveal numerous suppliers of this or similar popular items. As denoted by colour in the diagram at the beginning of this article, the positive supply is connected to the centre protruding wire, and the negative to the input signal ground, second from the left. 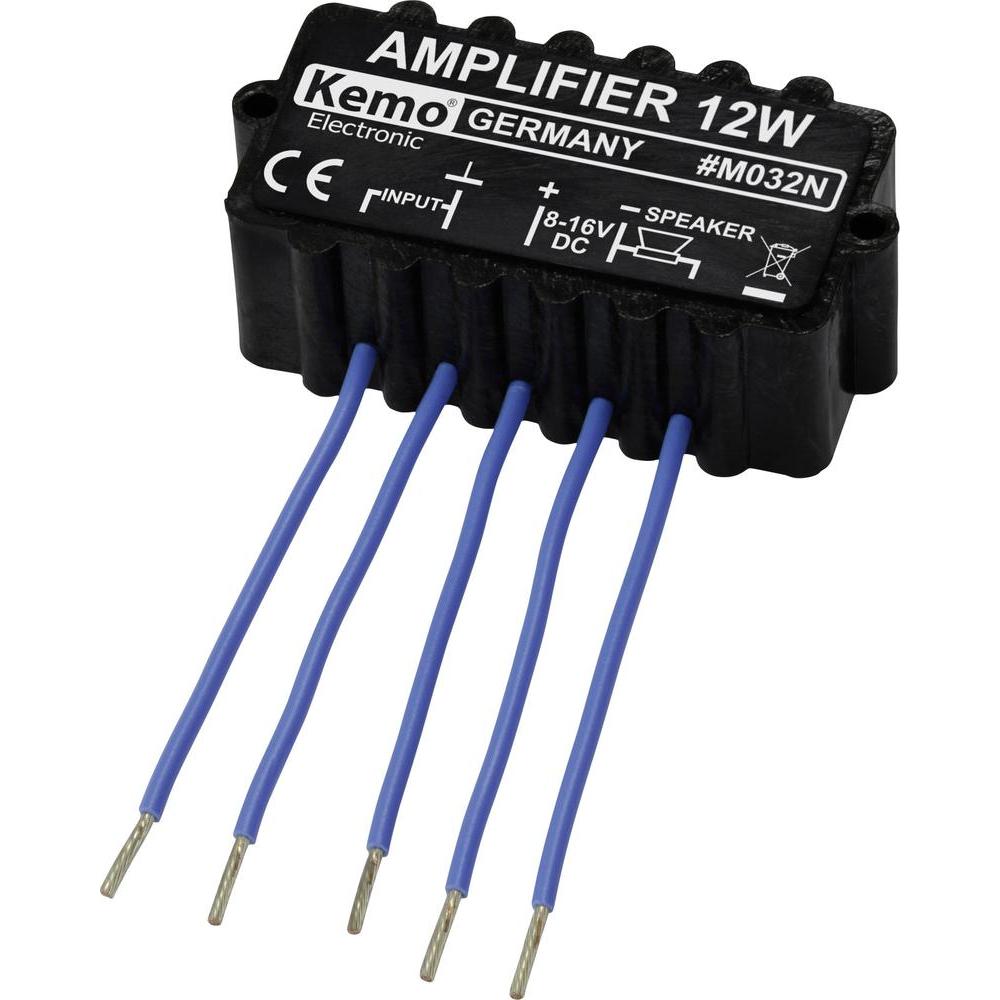 According to Ohm’s law, a 12 watt signal at 12 volts equates to a maximum output current of 1 amp from the Kemo module. In the absence of a connected speaker, this limit is imposed by the four 47 Ohm 10 watt ceramic resistors wired between the coils and amplifier return. In parallel, they equal about 12 ohms, thus providing a headroom 4 ohms. This assumes the amplifier is not being over-driven by an excessively high voltage input signal. If the resistors feel hot after a short period of operation, turn down the volume of the sound source until they run just warm.

Finally, referring back to construction of the trifilar coil, the amount of current to be passed suggests what diameter wire to use for winding. Consulting charts available online, 24 AWG appears adequate for the 1 amp calculated above.

Various applications for this project include promotion of personal or group empathy, or adding emotional reinforcment to artistic events. Please bear in mind, it may be unethical and possibly unlawful to attempt to influence anyone through covert means, particularly without their informed consent.