The premise of radionics is closely allied with spiritualist pursuits of clairvoyance and telekenisis. Its practitioner seeks to gain knowledge and selectively predispose objects or events through extra-physical channels. The point of departure is appropriation of electronic constructs to augment solitary mind power. Origin of this modality can be traced to early 1900’s alternative therapists who drew an analogy between energy healing and the emerging science of radio broadcast.

A typical session begins with tuning. An item or substance closely linked to the intended recipient is inserted within a receptacle upon the control panel. The desired outcome is visualised while fingertips of one hand are rubbed in a circular motion upon a plate of acrylic perspex or latex rubber. The first in a series of tuning knobs is then rotated with the opposie hand until an involuntary “grabbing” sensation on the plate indicates the correct dial position. This is repeated in sequence with all knobs present. If no grab is detected, that one is left at “0”. An additional dial labeled “intensity” enables a 0-10 quantitative readout to be obtained relating to any proposed function of the device. 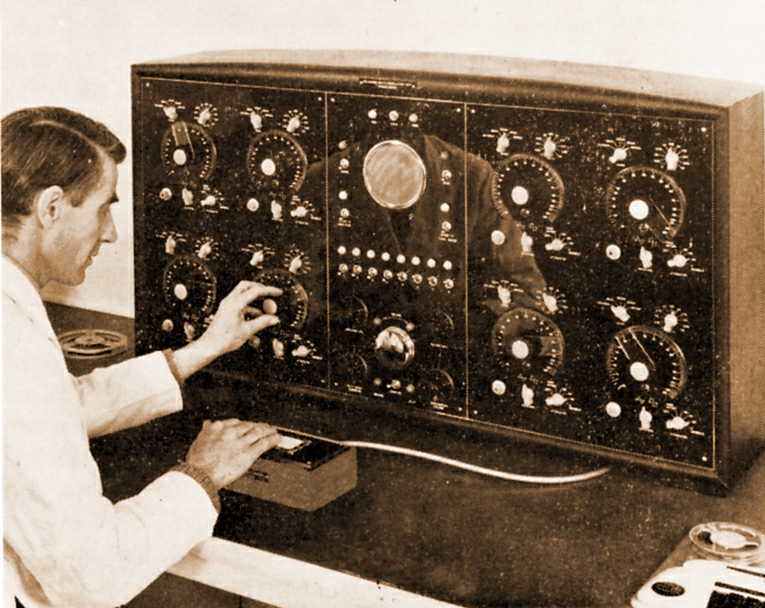 The grabbing, or “stick”, is caused by activation of cutaneous sweat glands in response to alignment between an actual and purposefully imagined truth. It is a mode of biotransduction related to that of conventional lie detection equipment, but broadened in scope to extract information from a deeper and more pervasive level of consciousness. The latter may be equated to a group or planetary mind, this being the neuro-energetic phenomena that defines the reality to which we collectively contribute. 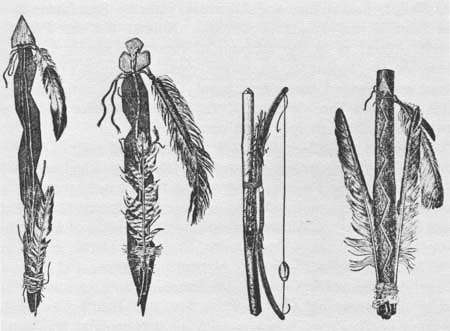 Over the millennia, ritual invocation has enlisted a wide variety support mechanisms ranging from found natural objects to elaborate temples. A common strategy for empowerment is to integrate these with the psychic momentum of a prevalent belief system. Underpinning this is an innate human capability to engage with pre-material domains and implant within them sustainable patterns of energy. Through a process of charge redistribution involving virtual particles, these mental constructs eventually acquire sufficient density to condense into solid form. 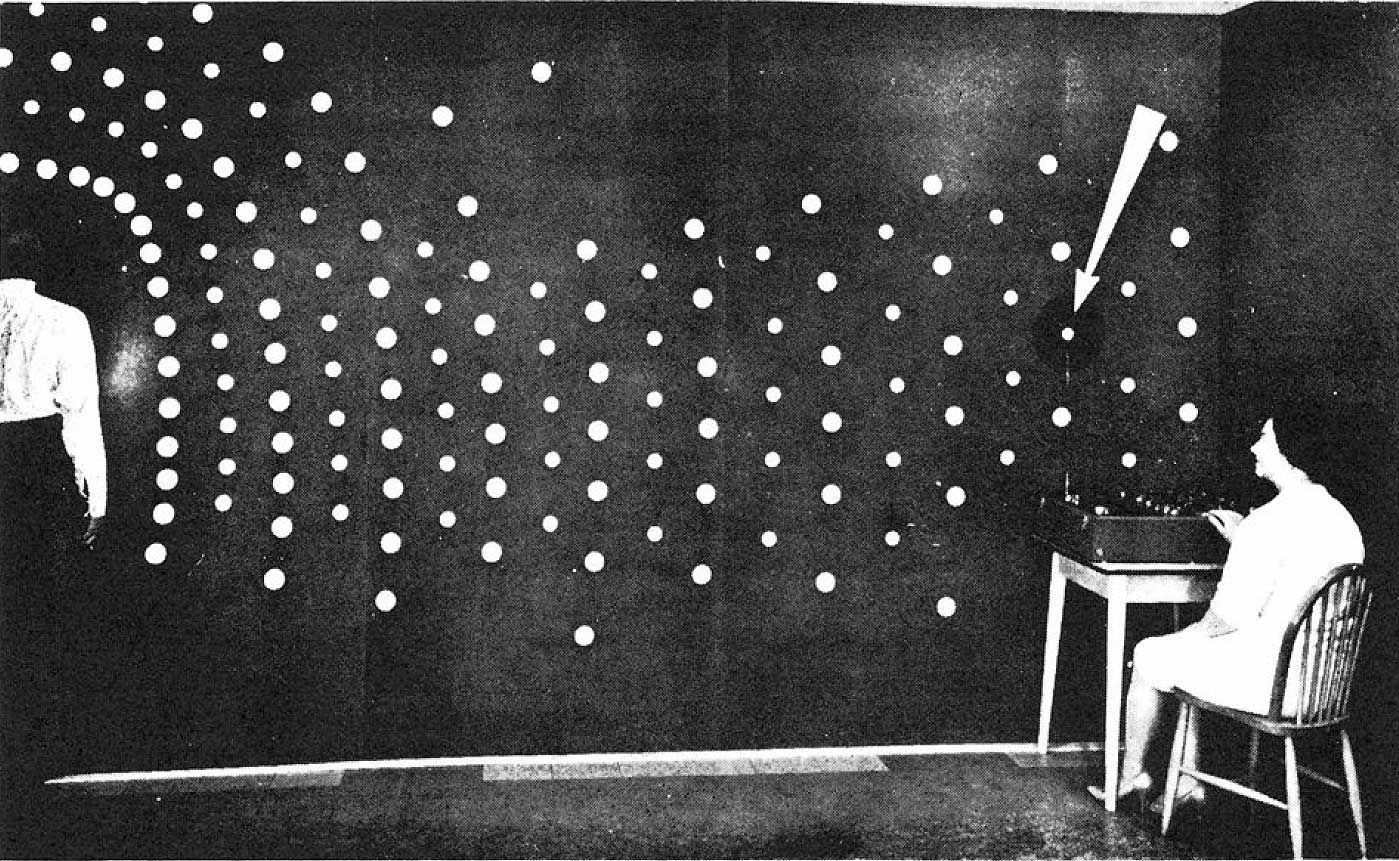 Graphic depiction of radionic influence across an invisible medium of etheric nodes.

To effect tuning, radionic instruments typically incorporate two or more manually rotatable components. Most common today are off-the-shelf, variable resistors (potentiometers or “pots”), centered beneath a numerically indexed dial face. Their radial geometry harkens to ancient structures such as Druidic stone circles and spoked Native American medicine wheels. In comparison, radionics offers the advantage of portability and self-power. It replaces arduous ceremonial performances with dials, and the force of up-welling Earth energy with magnetic or electrical current. As particles of the latter pass through the tuners, they acquire a “memory” of their physical path in the universal language of altered spin potentials. Upon superposition with the intended target, either physically present or not, this self-extracts as a tendency toward the operator’s intended effect.

A landmark of radionic evolution was the capacitively-tuned, amplified devices first built by Galen Hieronymus in the 1930’s. The design concept at the beginning of this article utilises his efficient 0-100 two dial tuning, but with the increasingly scarce plate condensors replaced by pots. A system of agriculturally oriented settings for this mode of operation entitled “Cosmiculture” can be downloaded for free from the Curio Books page. 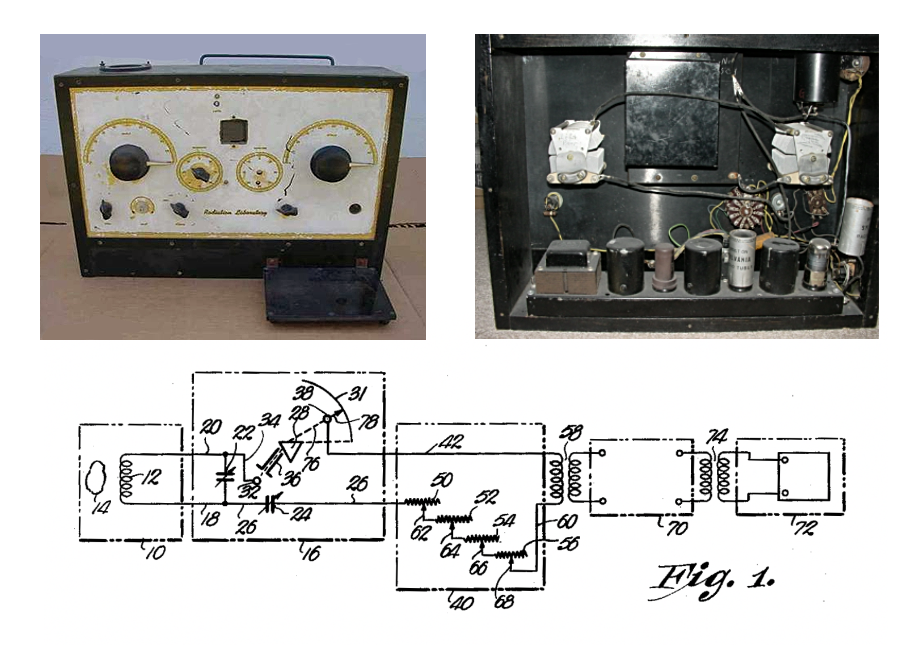 According to the diagram at the beginning of this article, the pots adjust the distribution of north (CCW) and south (CW) magnetic currents intertwining through the caduceus coil. These possess the qualities of compression and rarefaction respectively in a field intensity relationship of 1 to Phi. The Barium Titanate (BaTiO3) capacitors interface responsively with ambient energy fields. An analogy of the entire circuit would be a magnetically tuned crystal radio that both receives and transmits. The step-up transformer acts as a passive amplifier, while the non-inductive mobius translates the output into the scalar domain of pre-manifestation as organisational potency. A variation on the above coil is the basket weave, essentially a chain of figure eights most easily wound on a circle of vertical dowels.

For obvious reasons, any method that relies even in part upon a learned subjective ability cannot be endorsed for actual human therapy. However, there exist countless other potential applications, as indicated by the following practical example. Place a leaf from a sick plant within the instrument’s receptacle. Then slowly rotate the “intensity” knob from 0 to 10 while asking for the current level of vitality. Stop turning when a positive “grab” provides a quantitative readout. Turn the knob back to “0”. In a similar fashion, the effect of any proposed remedy may be known in advance by placing it in the well along with the leaf. 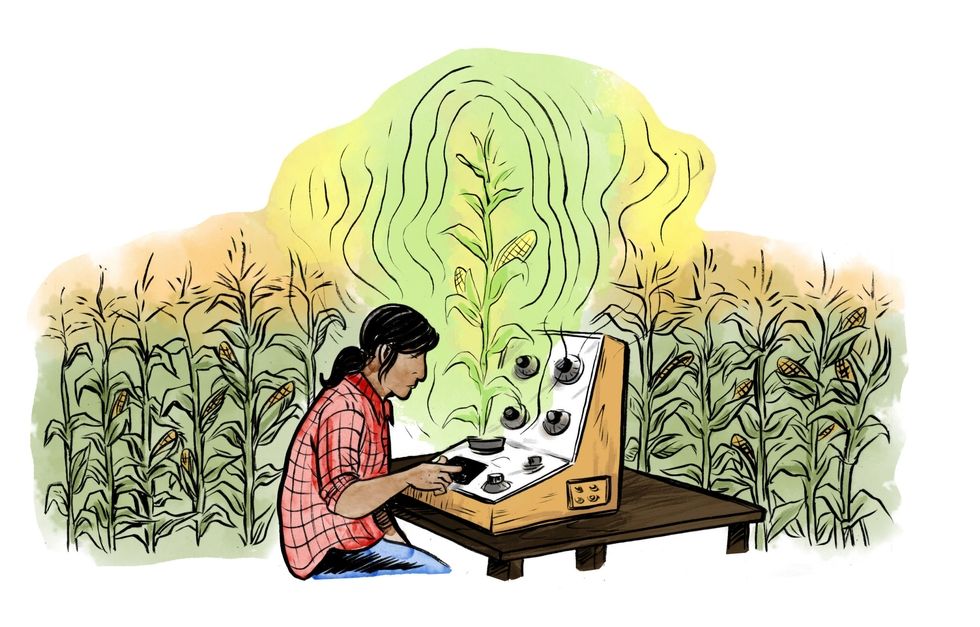 Visualising the desired condition of health while dowsing for a suitable rate.

Next form a stable mental image of the plant in perfect health while slowly rotating the first rate knob from 0 to 100. Repeat with the second rate knob. Leave the instrument for an hour and then recheck the vitality for any improvement. Unlike referring to published rate lists, this streamlined technique automatically encompasses all prevailing factors, without the necessity for detailed analysis or specialised expertise. Once a positive response is obtained, remedial application should be not continuous but rather periodic throughout the day to avoid possible acclimatisation to the transmiited influence. 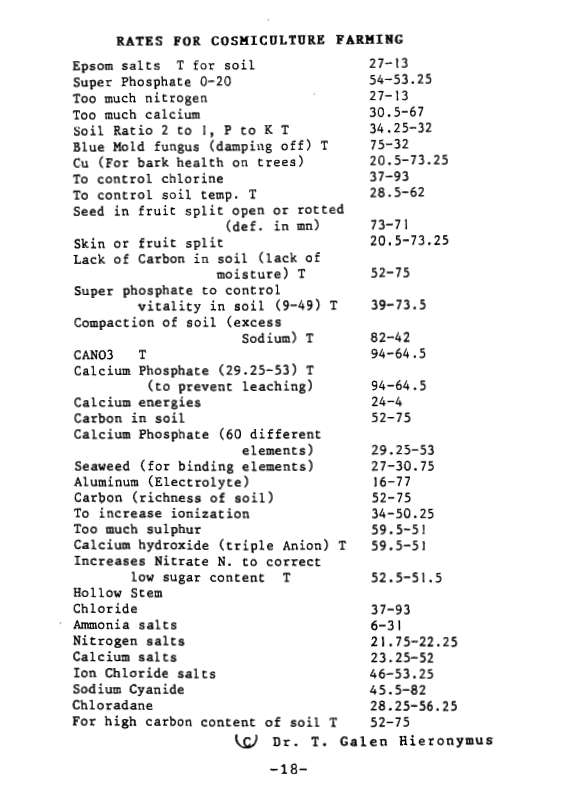 Above is a sample page of two-dial agricultural rates according to Hieronymus. Note that some require accuracy to quarters of a dial increment, thus necessitating a very sharp pointer knob. It none can be found, drill a hole in the side of any knob and glue in a short length of sewing pin or similar. The next most prominent tuning system, popularised by the British dowser George de la Warr, employs 0-10 indexing. This requires each individual tuning to occupy up to nine dials. A symbolic mock-up of the control panel is provided on the Dowsing Tools page. Details for construction of fully working instrument are given on the Classic Radionics page. Photos of the inner workings of similar historical devices may be viewed in the Image Gallery to the right. 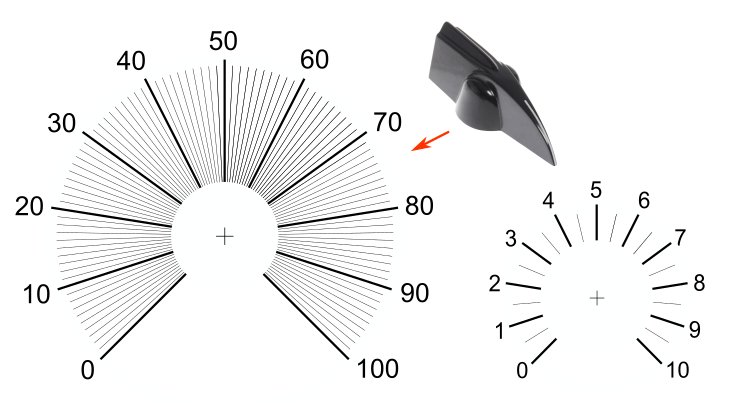 The “rate” and “intensity” dial faces rendered above reflect the standard carbon potentiometer arc of a full 270 degrees. The extremes of travel for each must coincide precisely with the first and last numerical increments. Due to manufacturing variations, this may not always occur. One solution is to employ a vector graphics computer program to compress or stretch the artwork. When choosing a pot, prefer the larger common diameter, with a smooth 1/4″ diameter shaft and grub screw to allow easier alignment with the dial scale.

Anyone consulting a published rate book will notice both positive and negative items are listed. To accommodate this, a DPDT pole reversing switch can be inserted between our instrument’s transformer and mobius coil. Their common connections can then be selectively swapped from those shown in the diagram to dispell, rather than summon, the dial-specified object or condition.

It is sometimes asked if radionics is genuine hardware or simply a contrived focus for creative intent. By now, the reader may  appreciate that, while obeying slightly different “laws”, these genres are complementary rather than mutually exclusive. For example, one clear advantage of a physical device is that it can be tuned and then for a time forgotten. This provides isolation from conceptual bias, self-interest and limitations of personal vitality that might otherwise pinch off the energetic pathways required for successful operation. Another benefit is that bi-dexterous operation of the knobs and plate during intuitive tuning results in a performance boosting conjunction of left and right brain hemispheres.

Ideally, any “reality engineering” should attempt to align its intent and motivational force with a plausible sequence of events. Trying to grow melons on a blade of grass would require such an immense reorganisation of the supporting ethers as to be not worth attempting. 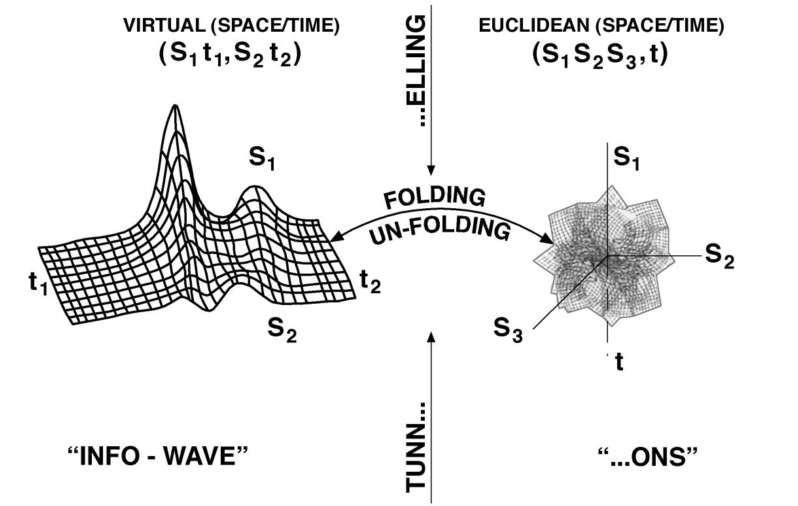 Further insight into the creative dynamics between mind and matter may be obtained from elements of modern quantum physics such as particle entanglement, vacuum polarisation and the Many Interacting Worlds Theory (MIW). For a balanced historical perspective on the topic at hand see Edward Russell’s excellent book, “Report on Radioncs”.