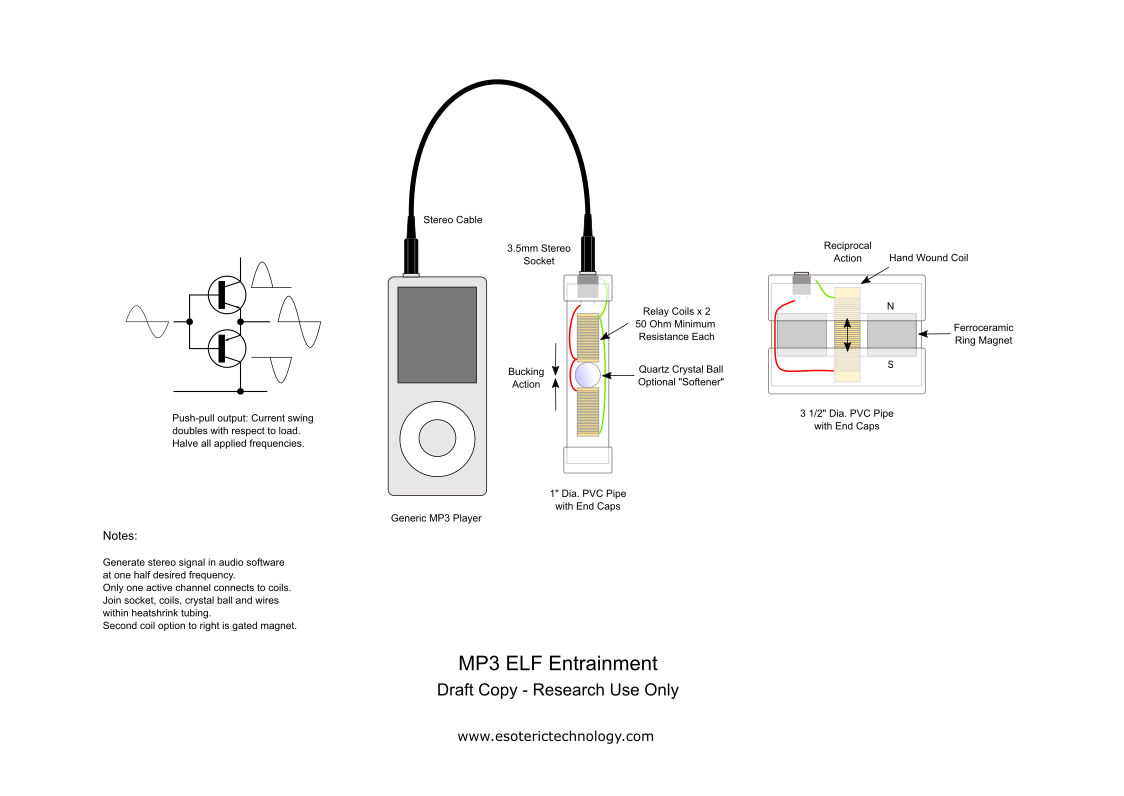 This compact device is intended to help mitigate the adverse psychic effects caused by electro-pollution, geopathic zones or other energetic disturbances. It incorporates a generic MP3 player for cheap and versatile signal storage and playback. In place of headphones, either of two suggested emitters may be connected to the output. Both rely upon repulsion, or “bucking”, to translate conventional magnetic flux into a higher order torsion field. Observant researchers can feel it as a fluttering sensation in the solar plexus region at the administered frequency. 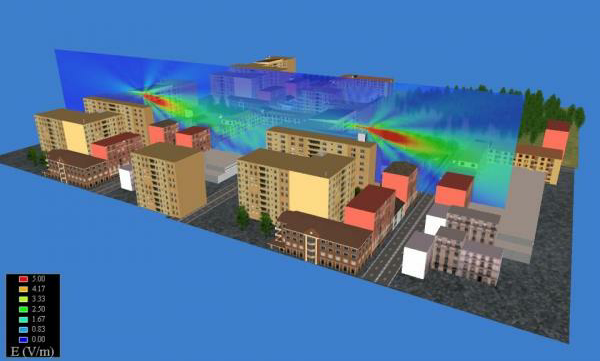 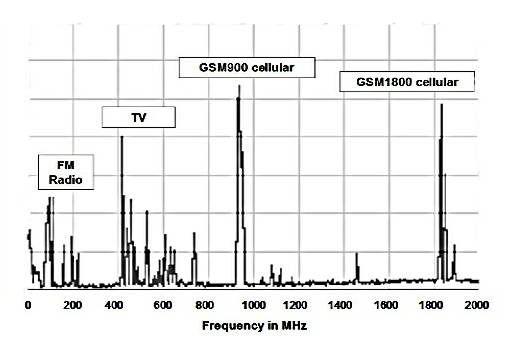 The first emitter is comprised of two identical air core coils, as removed from mechanical switching relays. To avoid overloading the output stage of the MP3 player, each coil should have an internal resistance of no less than about 30-50 Ohms. When wired in parallel as shown, they reduce to an acceptable 15-25 Ohm load. Higher resistance values will work but proportionately weaken the output. For ease of assembly, slide the wired coils and crystal into a length of heat shrink tubing. This is then pushed over the back of the 3.5mm socket before applying heat to firmly compact it all together. 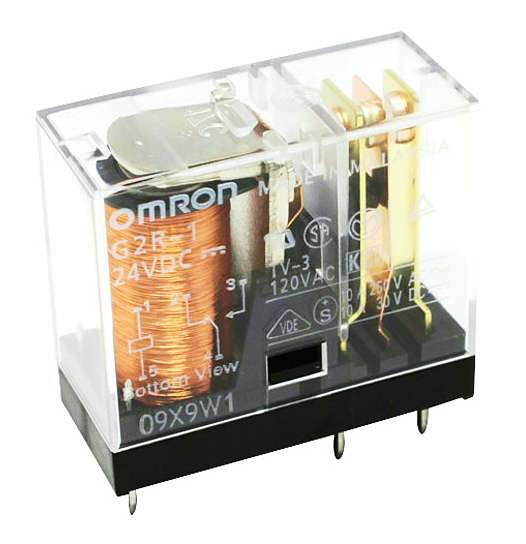 Copper wire coil is visible within this mechanical switching relay.

The solitary coil within the second emitter offers the sometimes preferred option of hand winding, for example enamel-coated wire upon a 35mm film spool. As current passes through, one half of each cycle opposes the static field along the central axis of the ferrite ring magnet, thereby producing a similar bucking effect.

A third alternative is to fit a smaller build of the self-cancelling bifilar coil employed in the Hyper-realism Audio project. Refer to the image gallery for other possible configurations. In each instance, current within one wire flows oppositely to that in the adjacent ones. The resulting suppression of respective EM field vectors creates a rarefied emission sometimes termed “scalar waves”. Due to their inherently low internal resistance, this configuration needs to be “loaded up” with a 15-25 Ohm external resistor in its return path.

For slightly higher outputs in stationary situations, cut away the cone from a USB-powered computer speaker. Then connect a preferred emitter in series with the internal amplifier on its “positive” side.

To elicit a predetermined response, corresponding dynamics must first be engineered into the signal to be applied. It is recommended to work in stereo to avoid accidental miswiring, even though only one audio channel needs to be connected to the coils.

In common with most consumer sound products, the MP3 player will try to filter out low frequency content. By coincidence, this is exactly the portion of the spectrum needed for the present application. The simplest work-around is to embed any subaudio content as amplitude modulation within a non-interferring or “neutral” audio tone. As an added bonus, this boosts signal density and radius of effect. Below is a practical example of how to generate this type of signal.

In keeping with the theme of this project, preferred signals are based upon natural energies that our receptive faculties will prioritise over discordant ones. The frequency above is the most prominent of a set of stable Earth-ionosphere cavity oscillations caused by global lightning storms. Known as the Schumann resonances (SR’s), their bandwidth coincides with that of human brainwaves, as indicated in the chart below. This constitutes an evolved mode of bio-reception that can be readily accessed through sympathetic stimuli. 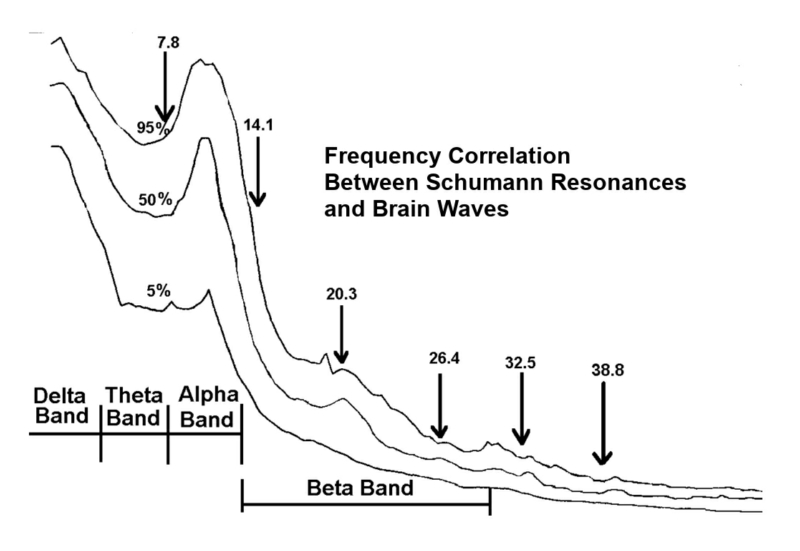 Our nominated carrier tone is an harmonic of the 365 day Earth year. Additional audio frequencies related to nature, physical constants or “sacred” sounds can be easily sourced on the internet.

Next, highlight both created stereo channels by Shift clicking in the left margin of each. Then click: Tracks > Mix > Mix and Render to generate the amplitude modulated product. Note that in doing so, the final amplitude doubles to 0.8. By resizing the window, all six tracks should be visible as in the following screenshot. 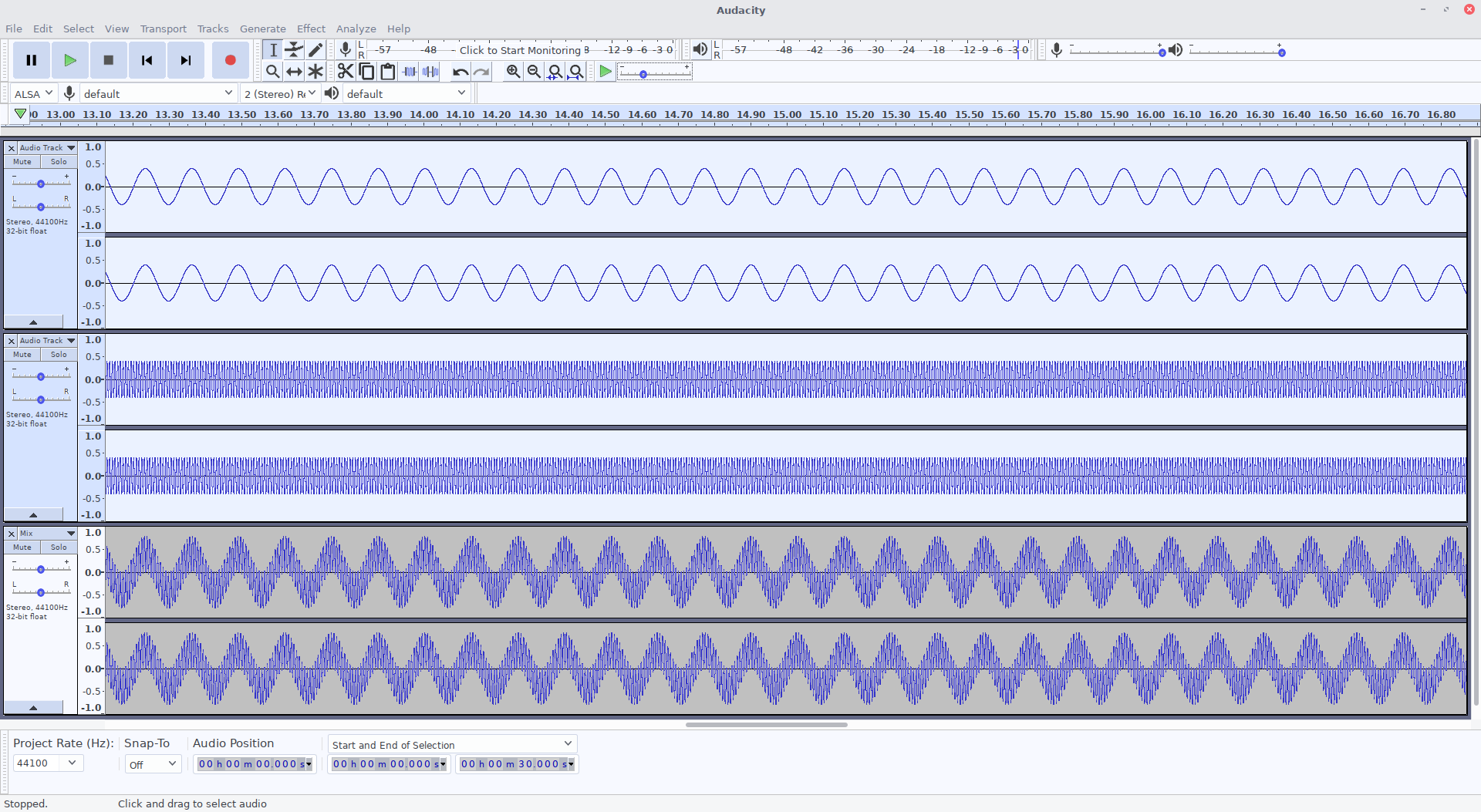 There is one final and important consideration. For efficiency, most consumer sound players utilise a push-pull output stage. This causes the current within opposing electromagnetic coils to reverse once per cycle. In the case of our bucking coils, the magnetic poles orient first north-to-north, and then south-to-south. The effect is to create a tensor field at twice the frequency of the originally generated signal. One obvious solution is to select the mixed stereo tracks above and reduce their speed of play by half.

Effects > Change speed > Speed multiplier 0.5. The second emitter in the diagram does not require this compensation because its field is unipolar and thus remains in a steady state of opposition. Another way to eliminate current reversal is to bridge the device’s output capacitor. This will elevate the signal above the DC crossover line, but in doing so places additional load upon the amplifier. For this reason, it should only be attempted by researchers having electronic skills.

Save the completed signal in MP3 format. Play back in repeat mode for continuous operation. Click on the following link to listen to, or download, the end result of the above process: 3.9Hz+68Hz Sine.mp3

Due to its aforementioned alignment with brainwaves, the SR bandwidth contains other frequencies that, on an individual basis, can evoke moods or mind states across the normal range of human subjective capabilities. Below are a few examples. Note that repetitive, or deterministic, signals can be rendered more “natural” by modulating with filtered white noise, or a recording of wind, surf or flowing water. For more on this, see the Randominity page.