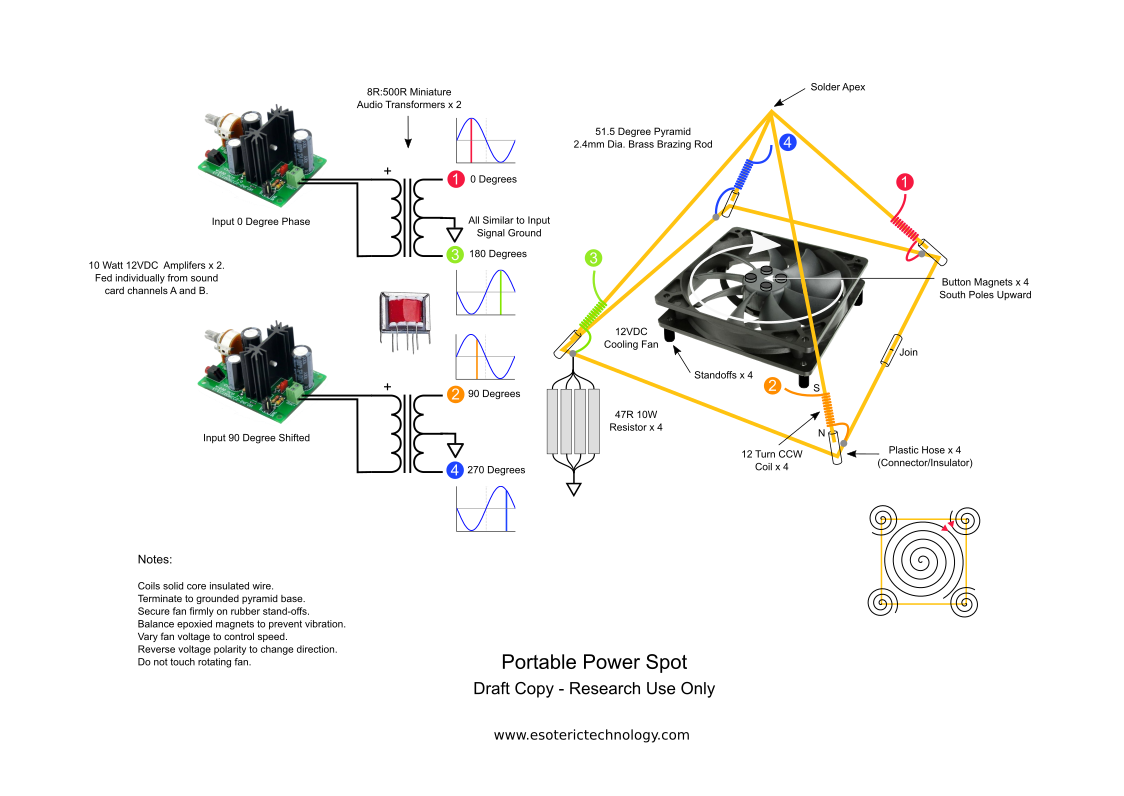 Archetypal reductions of geometry and motion constitute a back-channel for exchange of manifestational energy. Further stated, they function as a resolving lens for projection of creative will into and out of matter. Each offers a low loss pathway across multiple domains of existence, conducive to the modes of actions categorised below. Hence, they are at once templates of the universe and non-volatile packaging for causal information. In this context, higher attributes such as “beauty” are seen to be predisposed by a congregation of affinitive structure.

Relative to the above influences, rotational polarity is analogous to a gatekeeper. For the purpose at hand, clockwise (CW) releases or expands, while counterclockwise (CCW) absorbs or retracts. Unipolar rotation conjoined across multiple elements reinforces these attributes. By contrast, when opposite polarities interface on a single plane, the result is mutual cancellation. To the extent they do so, converging force is compressed into extra-dimensional nodes patterned upon the originating angular momentum. There they reside in a virtual state as a predisposing influence upon subordinate levels of manifestation. For a practical example, refer to the coil in the Hyper Realism Audio diagram.

The following text offers one example of how these abstract concepts may be applied to a coherent and operational world view. Due to the imperatives of survival, our distant ancestors were keen observers of natural phenomena. Unburdened by the complexities of modern life, this capability was free to extend beyond overt perception into the pre-material realm. Sensing opportunity to intervene in a supernatural cause and effect relationship, they investigated the threshold between these two states, and the psycho-physical methods through which it could be traversed at will. 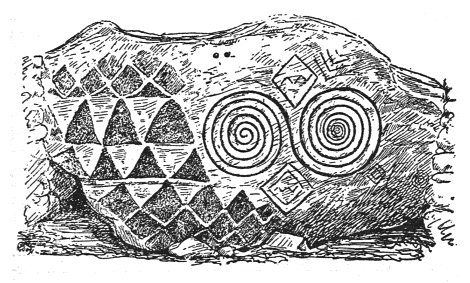 One case in point is the foundation stone of Newgrange, a Bronze Age ceremonial site in the UK. As viewed from left-to-right, the double spiral above first unpacks CW from a zero point to occupy an observable dimension, and then reverses 180 CCW degrees back into its hidden source. This alludes to a singular origin for all apparent duality. The identical chirality of both spirals, or torsion dynamic, defines the order of reciprocal flow. The entire pattern is like a mobius coil in which the return crossover is an extra-dimensional fulcum. To the left, diagonal squares, or diamonds, morph vertically into triangles and then back again, suggesting an interdependent relationship between matter and spirit. Appropriately, the dark, or manifest, upward-reaching triangles are defined by an “etheric” background of  descending ones. 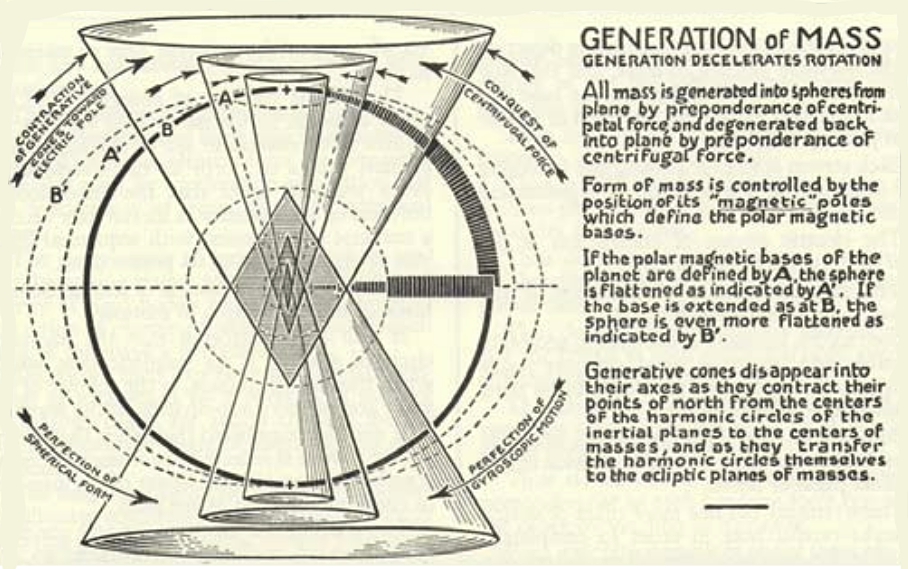 The same theme is repeated in the inscribed diamonds above and below the spirals, wherein the set of the open triangles within one is inverted from the other. In conjunction with the diamonds themselves, this highlights the anti-phase boundary conditions for the inter-dimensional point of transit between the two spirals. If one spiral is folded flat over the other it makes a field-cancelling, bifilar pancake coil similar to that used in the Hyper-Realism Audio project. The same theme is repeated in the 180 degree offset between rows of diamonds that expresses a lateral wave progression or frequency. The overall impression is one of a self-sustaining balance of forces in opposition. In other words, a portal. A similar concept is expressed by the vesica pisces symbol, being a superposition of two circular lines upon each other’s centre point..

Within Newgrange itself is found further evidence of its purpose in the guise of engineered acoustic resonances to be activated by ritual chanting. Their grouping around the 110Hz eigenfrequency of the adult human body suggests an intuitively arrived-at mechanism for quantum field excitation. The implied outcome is an induced transcendental or religious experience. To simulate this effect, download the following 30 second track. Play in loop mode through two large speakers placed face-to-face. The resultant standing wave can be experienced by sitting midway between them.

The diagram at the beginning of this article represents a synergism of the above principles. Generally speaking, it also demonstrates how to use split secondary transformers to derive a rotational field from only two input signals. This means the latter can be generated in software and output via a consumer sound card, and stereo amplifier if desired for added power. An open frame 3D pyramid is comprised of four triangles resting upon a square base. With reference to the earlier list of correspondences, it incorporates the divergent properties of edification and radiation. In the Egyptian format, these are harmonised by making each leg ascend upward at 51.8 degrees. The resulting Phi-ratioed proportions invoke a spherical geometry that aligns with the undifferentiated evolutionary metric of the universe. 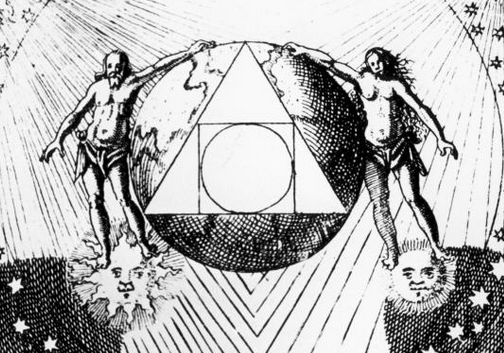 To determine optimal lengths for base and sides, observe the following principle. Physical objects re-radiate applied energy in a transformed state based upon their dimensions. These emissions stratify according to equivalent wavelengths into harmonic intervals within morphology of space. Because space is tensioned by the very presence of matter, a self-reinforcing feedback loop occurs. To capitalise upon this effect, select a numerator that possesses an implicitly universal scope of action. The Egyptian cubit of 52.36 cm is derived from the circumference of a circle with a value of 1. Halving this value to 26.18cm yields a manageable size for the base. To comply with the 51.8 degree slope, the sides then become 24.89cm.

To construct the pyramid, bend a 1 metre length of 2.4mm brazing rod so there are four 90 degree corners and a join midway down one side. Puncture through four pieces of clear plastic hose and slide into position at each corner. The hose should be slightly smaller in diameter to ensure a snug fit. Bend another piece of rod to form two sides with an apex. Cut two more pieces the same length as one side of the former. Insert their ends into four short pieces of clear plastic hose. Bring the apex together and solder. Wind twelve turn CCW coils of solid core, insulated wire vertically from the base. Remember that a CCW coil is wound with a CW motion.

To simulate a naturally occurring vortex, and dynamically integrate the base with the legs, virtual rotation is now added. This is achieved much like an electric motor by energising the coils in a timed rotational sequence. Four sinusoidal signals are required that possess evenly distributed phase relationships adding up to 360 degrees. To avoid building circuitry from scratch, generate them within the free audio editing software Audacity.

A question now arises of what frequency to make them. For the purpose of wider integration, we will base this upon 572,560,080 cycles per second, the resonant frequency of the Egyptian cubit. To accommodate audio circuitry, divide by two 16 times in succession to achieve a lower harmonic of 8,736 cps or 8.736KHz.

Next create a duplicate track and phase shift it from the other by 90 degrees. The resulting tracks are fed independently to two matching amplifiers. Each drives a phase-splitting, miniature audio transformer (8R:500R), thereby outputting four signals at 0, 90, 180 and 270 degrees. The inclined coils result in a convergence of field intensity toward the apex. To boost its strength, add additional turns to the coils. Rotational polarity can be experimentally changed from CW to CCW by inverting the order of phased inputs.

Lastly, a 12VDC (not AC) cooling fan is added to the assembly. Bolt it to a firm substrate through four rubber stand-offs to absorb vibration and permit adequate air flow. Connect the fan’s power leads so it, and the four magnets epoxied to the hub, spins CW. When rotational polarity intermeshes peripherally with that of the coils (see diagram), the result is an up-welling vortex. Alternatively, for a downward portal-like effect, reverse the fan direction by swapping its leads. Speed of rotation can be intuitively adjusted with a variable power supply. Do not touch the blades while rotating, or allow foreign objects to make contact. The completed pyramid can function as a centre piece within a group setting for conditioning and unification of consciousness. Alternatively, sit over it in a wooden chair for personal meditation or exploration of ESP. 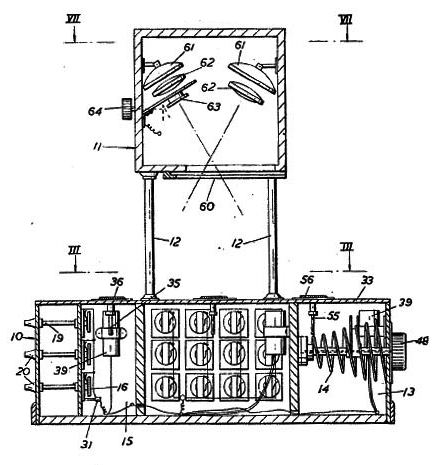 The fundamental significance of magnetic polarity should be carefully observed. On an organic level, south is stimulates while north suppresses or consumes. Which is “good or bad” depends upon the scope and purpose of one’s intent. For example, such duality can be advantageous in the inherently cyclic operations of agriculture.

Vortical rotation associated with magnets was the inspiration for conical spirals with a moveable tap as intalled within radionic devices such as the De la Warr thought camera pictured above (French patent 1.084,318). The speed at which a particle completes a full rotation accelerates toward the pointed end. It thus adds an inertial or temporal mode of tuning. An intuitive grasp of this principle is evident in Edgar Allan Poe’s classic story, “A Descent into the Maelstrom”. The implied lesson is mastery of both polarities as a unified reciprocal force.