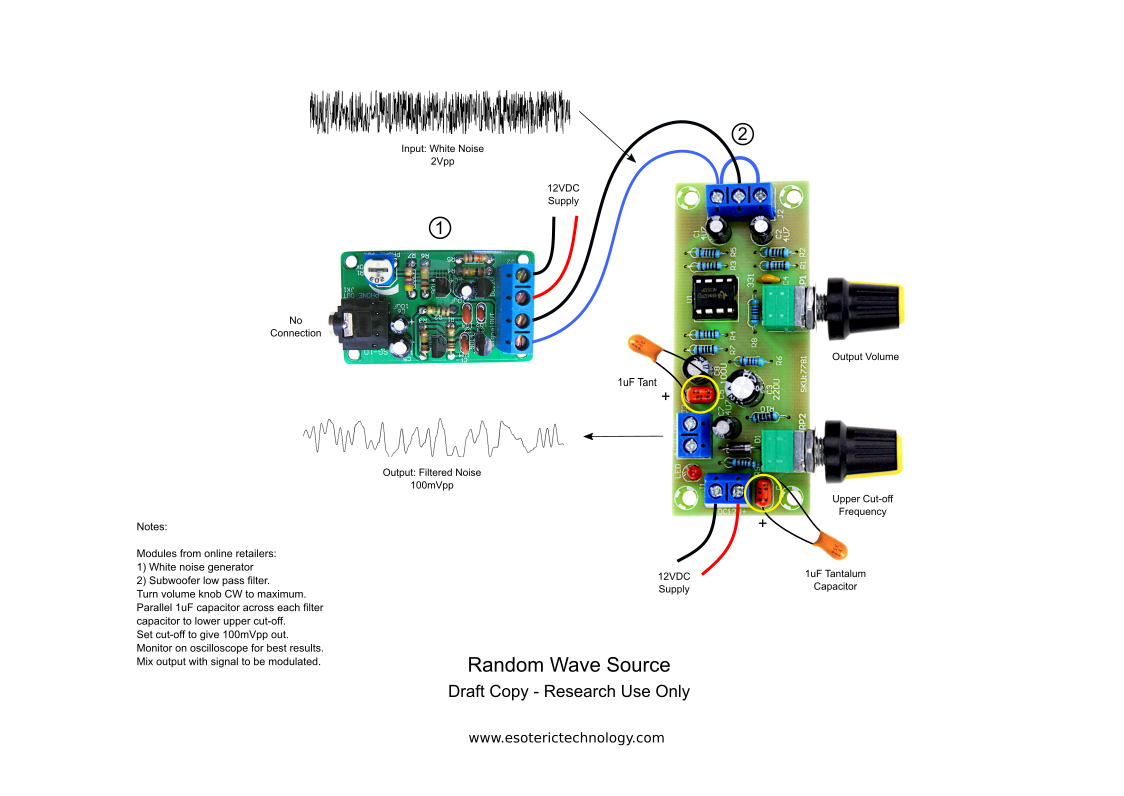 Broadly speaking, natural phenomena are complex analog functions. Additionally, they arise from innumerable force vectors or points of origin. This is the antithesis of modern technology patterned upon rectilinear, repetitious and local functions. For this reason, artificial entrainment signals may feel fatiguing and less effective under prolonged use. The solution proposed here involves special design considerations when seeking to address living systems. As a result of evolutionary adaptation, their primal faculties do not ascribe import to strongly deterministic stimuli. They may register at first and elicit a discernible effect. However, within a relatively short time frame, an autonomous neurological process intervenes to progressively dampen the triggered response mechanism. One might best explain this strategy as an economisation of attentiveness and life force. 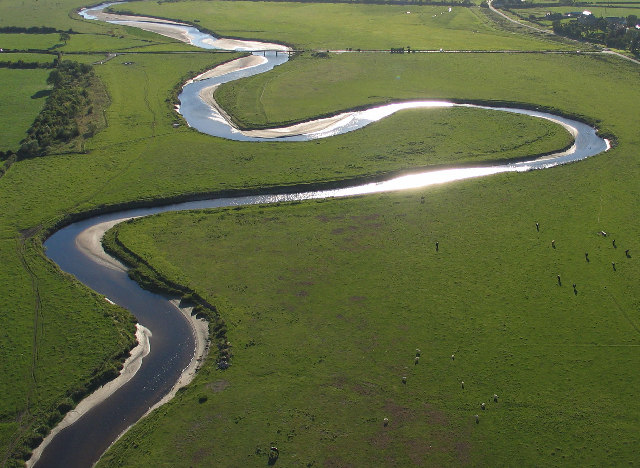 The above trait would obviously impair any artificially generated signal administered to elicit a frequency following response. However, this can be mitigated by superimposing the simulated dynamic of a natural process. One method for doing so is adding a random component, but only to the extent that the result is not predominantly chaotic. The latter would lead to disorientation and fatigue as the body struggles in vein to find any meaningful content. By contrast, the work at hand is to maximise assimilation through a palatable balance of insistence and an implied freedom to engage. Within the sphere of electro-technology, semiconductor junction noise is the most accessible randomising agent. It is a running sequence of all possible frequencies and voltage levels within its designed bandwidth.

To avoid blurring an intended subjective response, all frequencies above about 20-40Hz must first be removed from the noise. This results in a slow irregular wave form, much like what you might scribble on a piece of paper. When mixed with an entrainment signal, the product favourably resembles graphical output from a biophysical monitor. Note that this technique differs qualitatively in both result and invoked operational scale from incorporation of so-called “sacred geometries”. The latter instead introduce universal structure as a means to cohere otherwise discrete domains or dynamic processes.

Elsewhere in this website, brain wave type frequencies have been described that are indicative of, and therefore capable of inducing, specific mental states. For demonstration purposes, we will choose the dominant Earth-ionosphere cavity (Schumann) resonance of 7.8Hz. Through a remarkable example of geo-biological synchronicity, it lies within the alpha EEG band clinically associated with a relaxed introspective state.

The diagram at the top of this article is comprised of two manufactured circuit boards. One is a white noise generator, and the other a variable low pass “subwoofer” filter. Each is available from major global sellers online as a kit or ready-made module for $7-15 USD.  The cut-off frequency of the filter was lowered to about 40Hz by soldering a 1uF tantalum capacitor in parallel with each of the two polyester capacitors (circled in yellow). Check the ground plane on the reverse side of the board to get polarity right. 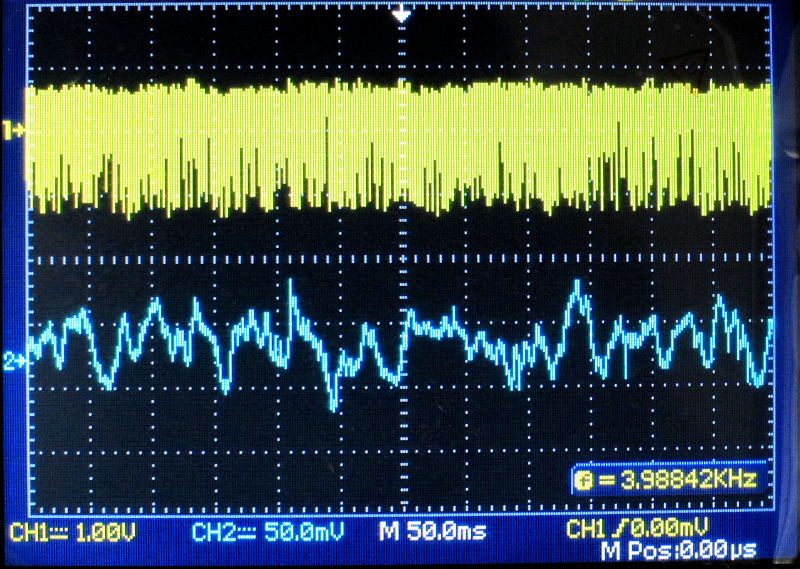 When operated from a 12VDC power supply, noise at a level of 2Vpp is fed into the filter. First turn the filter’s volume knob fully clockwise to maximum. Then rotate the cut-off knob counterclockwise from fully clockwise until most of the higher frequency content is removed, but not so much that the voltage level drops below about 100mVpp. For accuracy, the above adjustment should be monitored upon an oscilloscope as per the image above. Otherwise, one must rely entirely upon the subjective “feel” of the output once aerially propagated. Although not shown in the diagram, if the resulting 100mVpp random wave is mixed with an independently generated 2Vpp entrainment signal, an ideal ratio is created between the two of 1:20.

Alternative circuits, such as in the schematic above, can be built from scratch. It improves upon the project by incorporating an active filter. This provides a lower cut-off, as well as gain to compensate for loss of signal amplitude as higher frequency content is rolled off.

Doing It in Software

Readers who prefer software can experiment within the free, cross platform audio editing program Audacity. For demonstration purposes below, all tracks are limited 10 seconds. In practical use, choose a duration of 1-10 seconds and play back continuously in loop mode.

Two methods are described. The first amplitude modulates (AM) our nominated 7.8Hz with time stretched brownian noise. As in the screen shot below, this causes the former to randomly rise and fall in DC level. This differs in appearance from a simple overlay, or “mixing”, of signals as was proposed for the hardware filter’s output. An alternative source of randominity is to time stretch prerecorded nature sounds.

The next method employs Nyquist scripting to multiply the two generated signals. This simultaneously modulates both amplitude and phase (or frequency), thereby adding a desirable extra layer of randominity. Compared with the first method, this is not conducive to tinkering with settings while observing an immediate result on-screen.

For the purpose of clarity, the amplitude of tracks to be combined was left as is. In practice, the noise would be reduced by a factor of 10-20 for the reason mentioned in the second paragraph of this article. Note AM and/or FM, can also be performed entirely in Nyquist script. Ready made Audacity plug-ins for these functions and more are available at https://forum.audacityteam.org/viewtopic.php?p=211813#p211813

For readers skilled in circuit construction, the second type of modulation described above can alternatively be performed in hardware. This involves connecting a four quadrant multiplier chip to the available random wave. The AD633 IC has been chosen for the following LTSpice simulation. 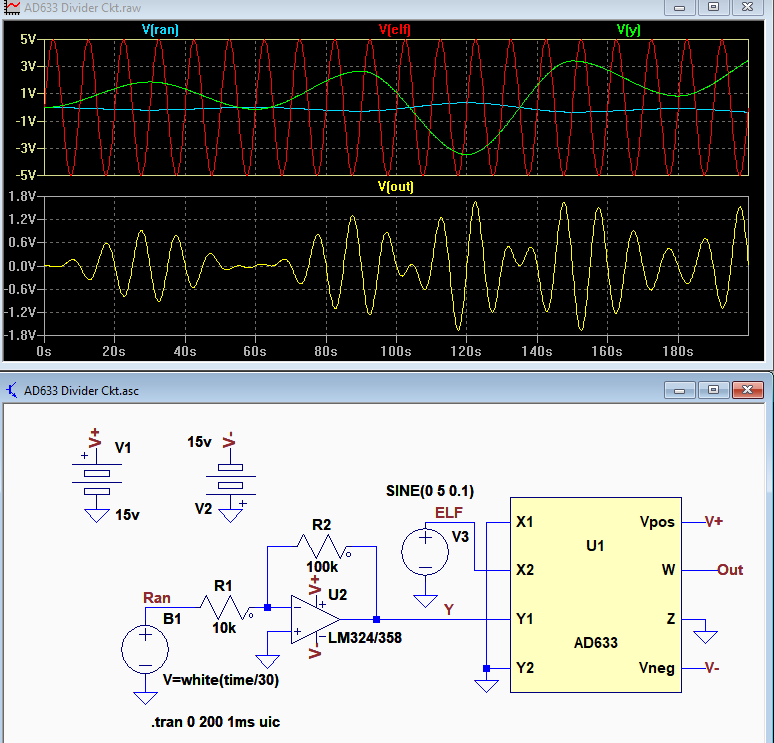 In order to efficiently energise an antenna of the type described elsewhere on this website, the completed signal should be raised in both voltage and current. This can be achieved by adding an emitter follower stage, usually comprised of single supply op amp with gain and power transistor. Circuits and design criteria are widely available online.

Some researchers believe that personal intent can be encoded within a random sequence by willfully projecting mental images upon its point of origin. These would presumably be transferred to any recording medium and then propagated with subsequent aerial transmission. This hints at a degree of relevance to the concepts presented in this article, as well as design of radionic type devices.

Stochastic resonance is yet another area of potential exploration. It capitalises upon the self-organising capabilities of living organisms. In this case, random noise is introduced in order to trigger a stronger, or “non-linear”, response. This effect has broad implications for the field of neuroscience in general.